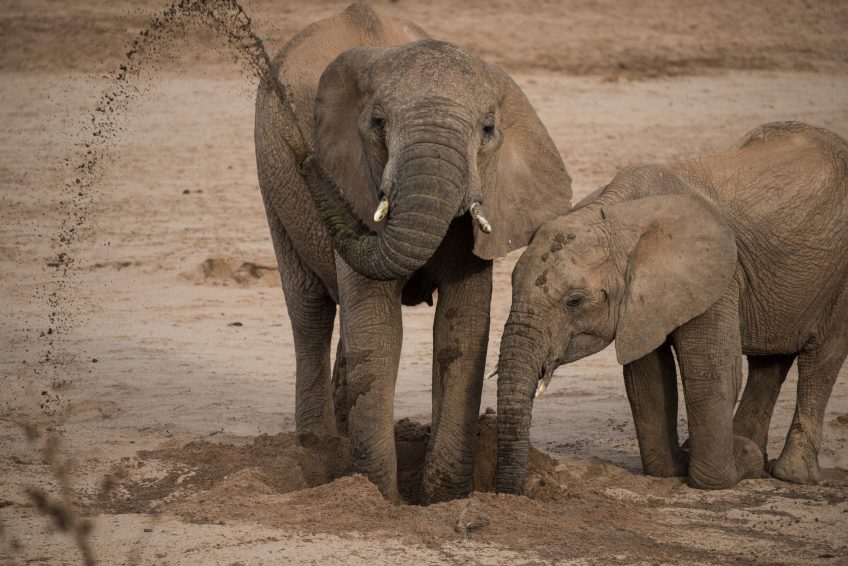 Sorry about the gap in posting – as soon as the good weather comes I am out walking and taking pictures (even if my locations aren’t as exotic as Africa!!) But today is wet and grey so back to my Kenyan trip last year …

The highlight of this afternoon was elephants digging for water in the dry river bed – particularly because I hadn’t seen it before. It always takes a while to get back into the rhythm when we set out on the afternoon safari but, because you never know quite what you will encounter, there is a real frisson of anticipation. Even without the elephant encounter there were some lovely moments.There was a lovely sighting of an African hare. Two things about it – firstly it sat still long enough to get a couple of shots off and secondly the position of the sun made its ears almost translucent. 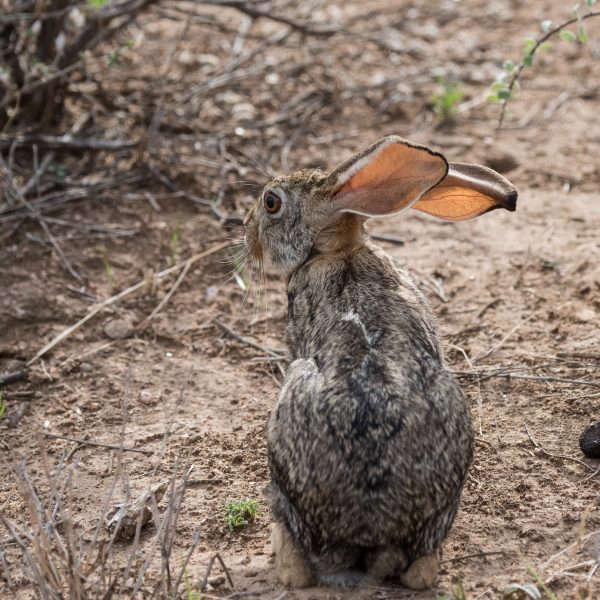 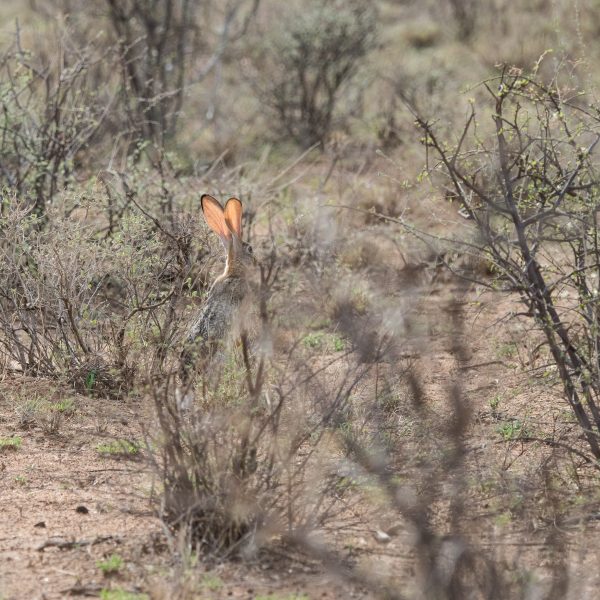 Then there were beautiful Reticulated Giraffe browsing in perfect scenery. Even when you know they have really flexible necks watching them wave and bend takes your breath away. 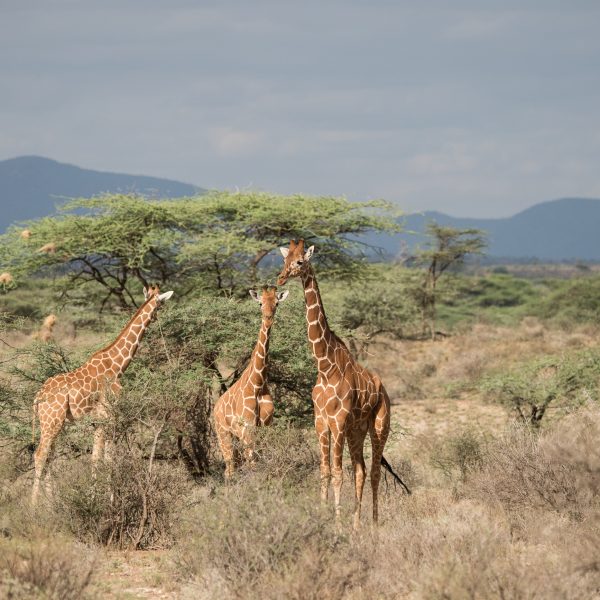 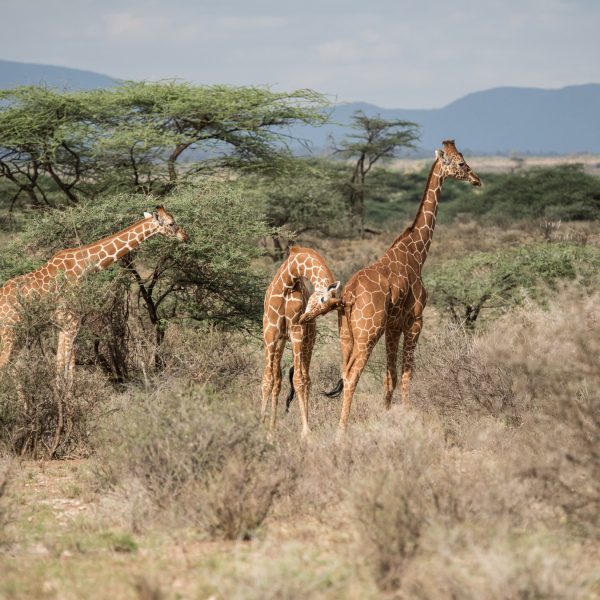 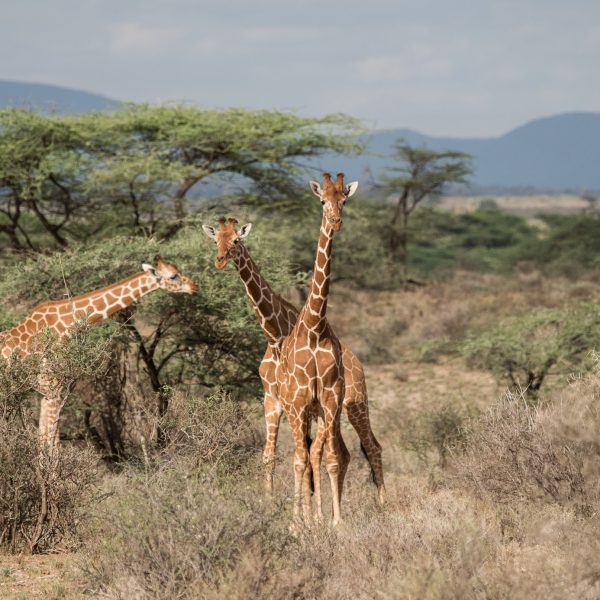 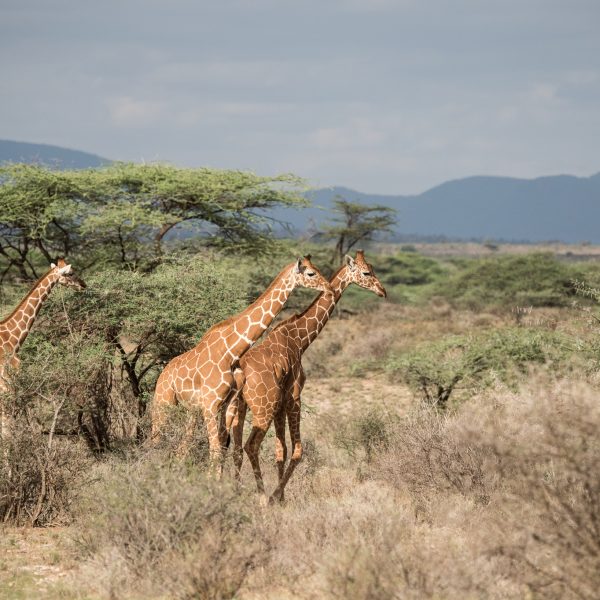 And there were a couple of sleeping jackals. They looked up as we stopped but were happy to settle back to their afternoon siesta. When I first looked at the pictures I was disappointed that I had auto-focussed on the grass in front of it but actually the slight softness better captures the complete relaxation of the jackal.  Sometimes you get an unexpected bonus!! 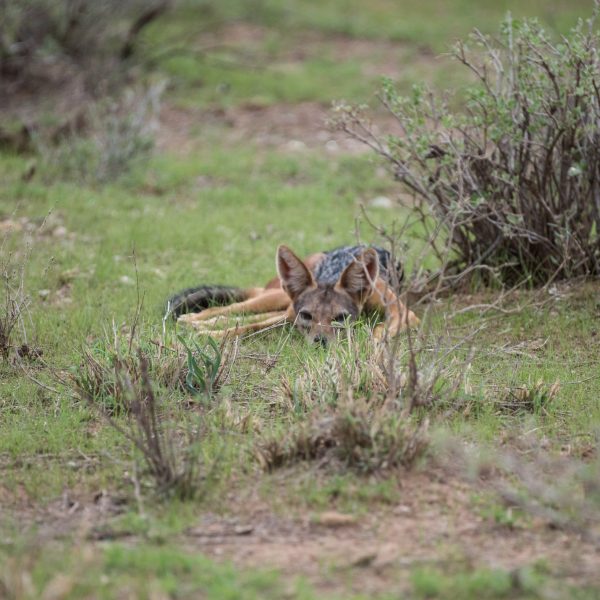 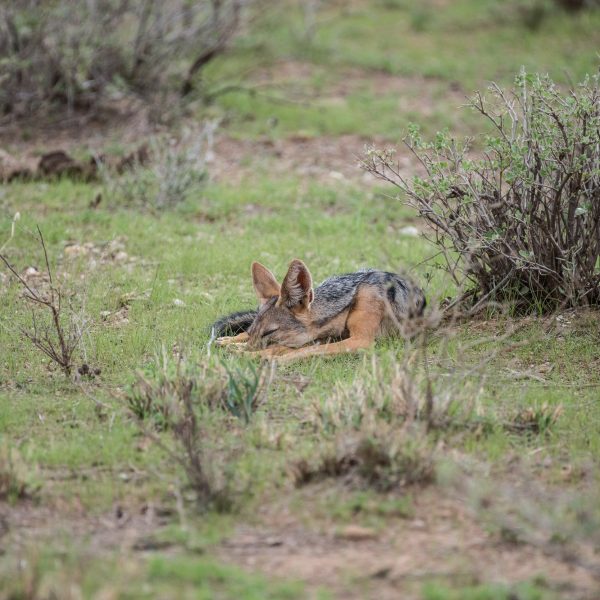 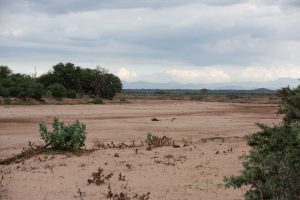 The vista of the bone dry river bed gives a sense of the enormous task facing the elephants. They need huge amounts of water and the herds had quite small babies.  The mothers need to ensure they get enough water themselves in order to keep feeding the youngsters. As they approached where the other elephants had found water the baby elephant in these photos suddenly got a new lease of life! 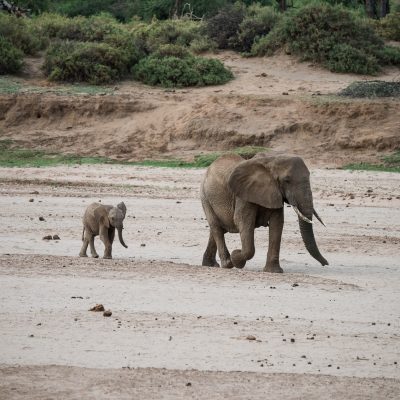 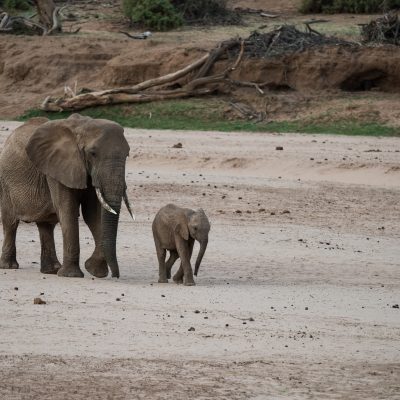 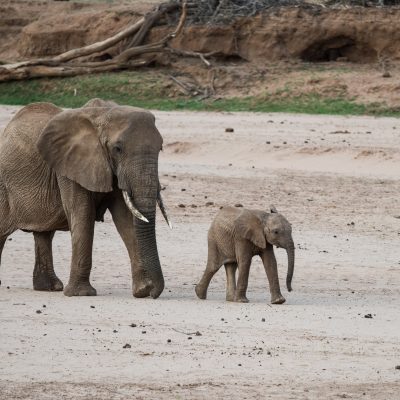 We could hear the elephants before we saw them. The low rumbling call is something you feel in the pit of your stomach. This was the first time I had seen them in such desperately dry conditions. They were digging out quite deep holes to access the water below the dry bed. It was fascinating to watch. Often a couple of elephants would be at one excavation. I watched a pair for quite some time. I think they were family and the smaller one seemed younger and less experienced.

The process involved loosening the sand by stamping the heel of the foot in the soft sand and then clearing it out by throwing it out of the hole either with the trunk or the toe.

At first there was some cooperation. But I love this picture on the right for the thing I didn’t notice when I took it.  The small elephant at the left of the photo has practically disappeared headfirst into an old waterhole in its attempt to get at some water.

Excavation activity was going on all over the river bed but this little group caught my eye. I am guessing, but this looks like a female with her previous calf and her latest. She has managed to reach water and is drinking – she actually blocked the older calf from getting into the hole while she did. It involved a gentle lean against it. In the meantime her youngest took the opportunity to feed – mother was drinking for two. I noticed later that she allowed the older calf to share the hole once she had taken some water herself.

However my attention was drawn back to the original pair. The excavation was continuing and getting deeper as the sand being thrown out was now damp. Some of the sand was being kicked out at the back of the hole. But there was still a way to go and the smaller elephant was getting impatient and putting its trunk into the hole. There was clearly a lot of learning going on and it is interesting that the little elephant in the background was also trying to copy the actions. 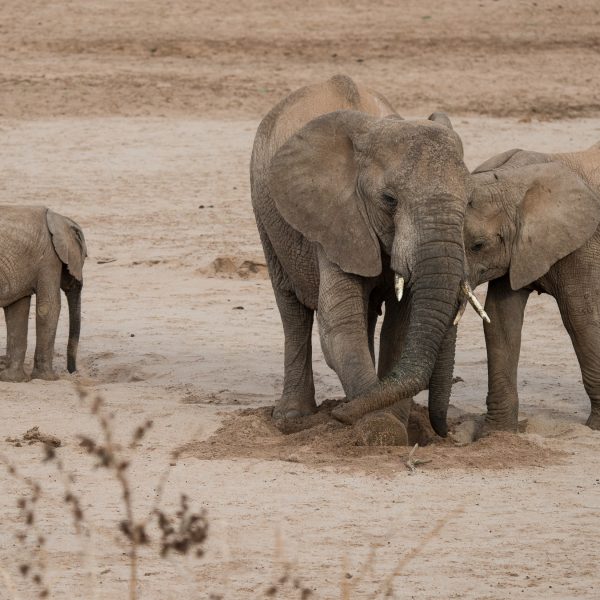 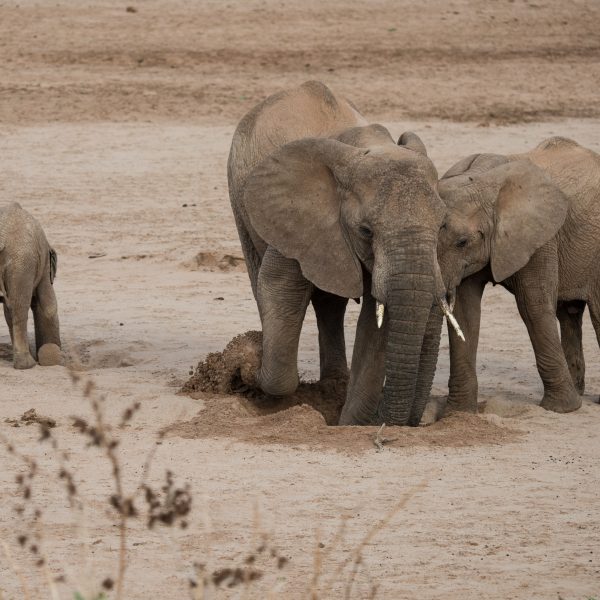 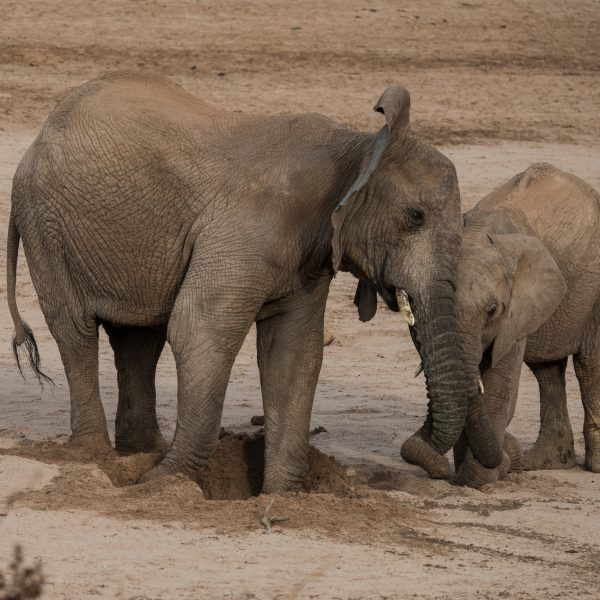 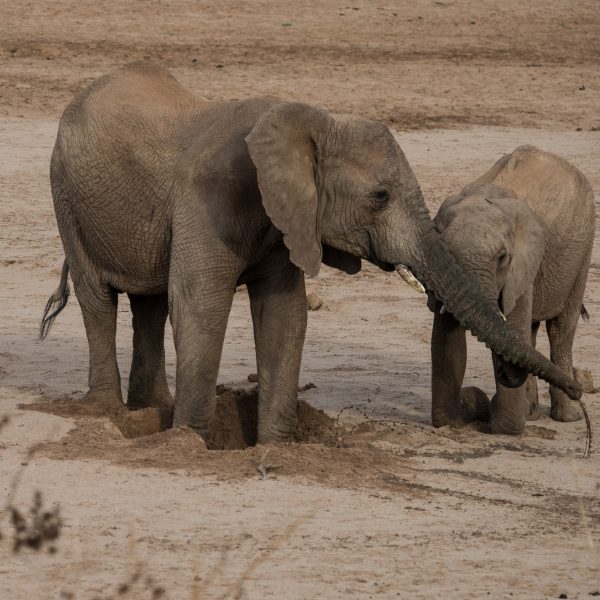 At first I thought the larger elephant was being protective of its water. It pushed the smaller one away – forcing it away from the hole and to its knees. There was a lot of rumbling and some higher pitched protests.  But then it became clear that although the larger one was taking water out of the hole it wasn’t drinking it. It was spraying it onto the sand. It wasn’t spraying its back or neck it was just removing it from the hole. Once enough had been got rid of it started to drink and allowed the smaller on to as well. 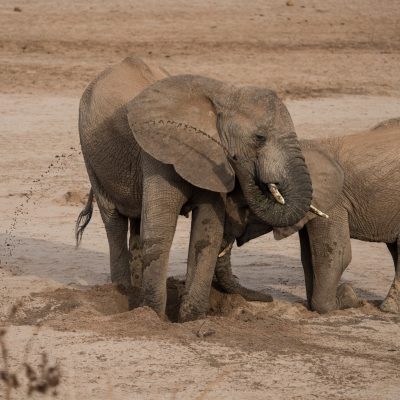 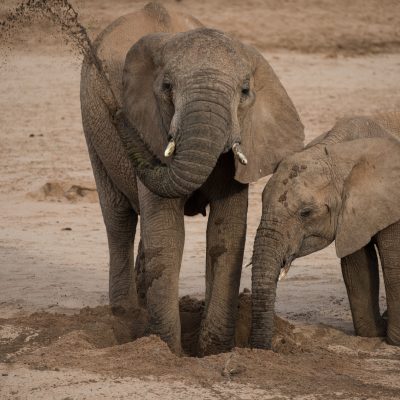 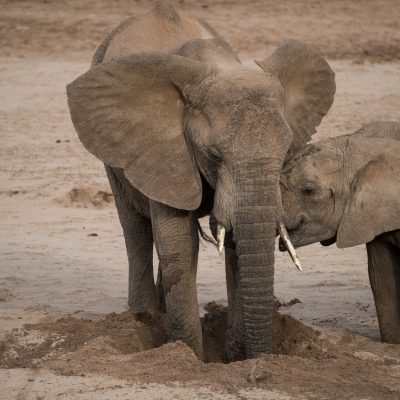 I saw other elephants behave in a similar way on this trip and think they must be super sensitive to the quality of the water and only drink when they get to the good stuff.