A leopard and cheetah confrontation 24 October 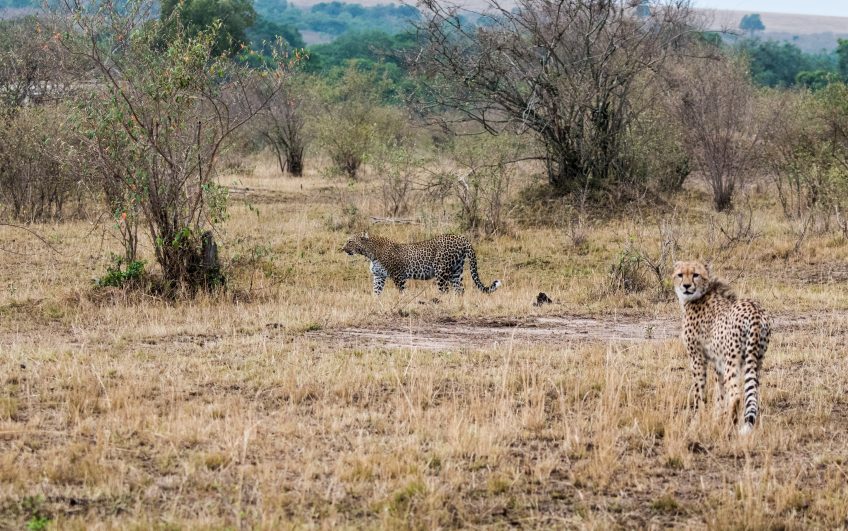 When we set out the next morning we passed the tree we had staked out the previous day. There were vehicles already there so we checked it out. It was likely the leopard was there since she had a kill stached in the tree. She was hidden in a similar position to the previous day. It wasn’t possible to tell whether she had been there all night or if she had returned to feed earlier as it got light. I hoped she had been to check on her cubs and feed them and had returned to feed herself. It was possible though that, with the disturbance the previous evening, she had simply stayed in the tree. It was busy and noisy again, with more and more vehicles arriving, so I opted to leave her and go look for something else. As it turned out it set us up for an interesting encounter.

The first find was the cheetah trio. These three were large cubs and at this time of the day they were enjoying the early morning sun. One of them obligingly rolled over and rubbed its back on the ground showing off its amazingly white belly. It’s hard to understand how it can be so white when it is so dusty in the Mara in October. The ground gives off clouds of fine grey dust with almost every move. I think that rubbing on the ground probably helps clear insects. The paw rubbing its eye is so like the action of a domestic cat.

But then one of them looked directly at us and you know you really wouldn’t argue with it – it is such a no nonsense look!

It didn’t take long for them to get up and move on. We moved with them and they chose to play on a beautiful dead log. The shape was fabulous and the light was improving so there was that golden ‘early morning’ glow. The first cheetah cub up on the log did the kind of back stretch that made you want to stretch with it!

The other two weren’t far behind and they were young enough to sometimes get it wrong as they climbed on to the slightly unstable log but they had the most amazing ability to correct their balance. You could see how important their tail was and how they splayed their toes and dug their claws in. 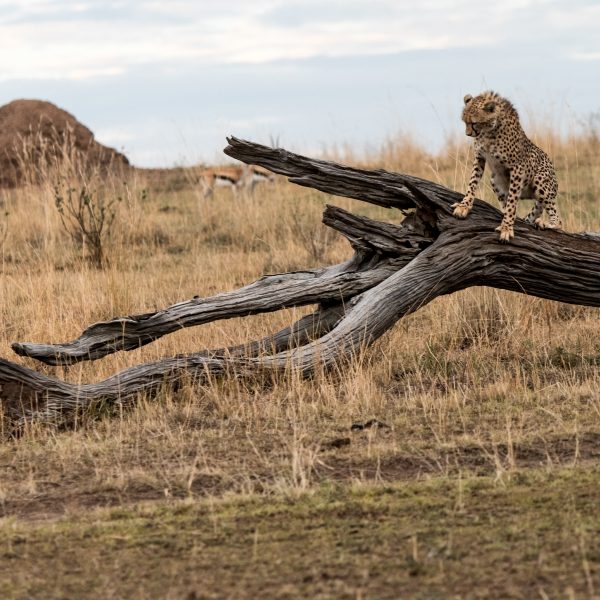 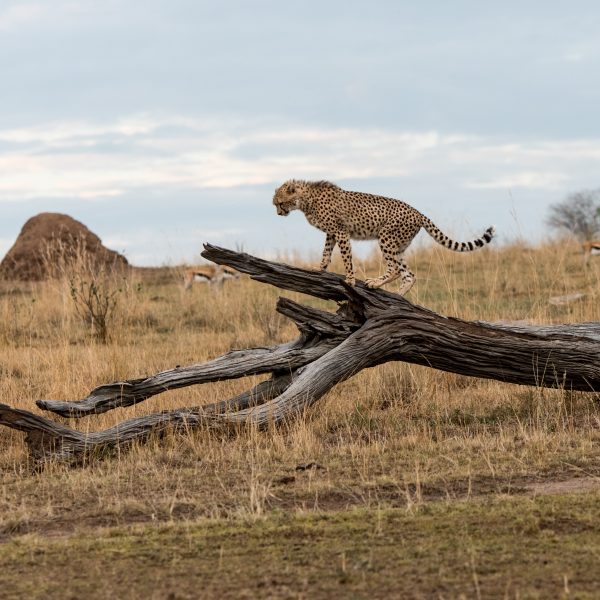 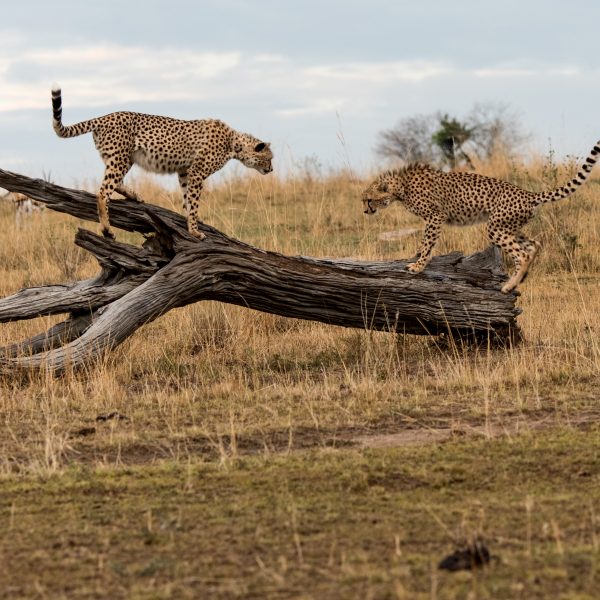 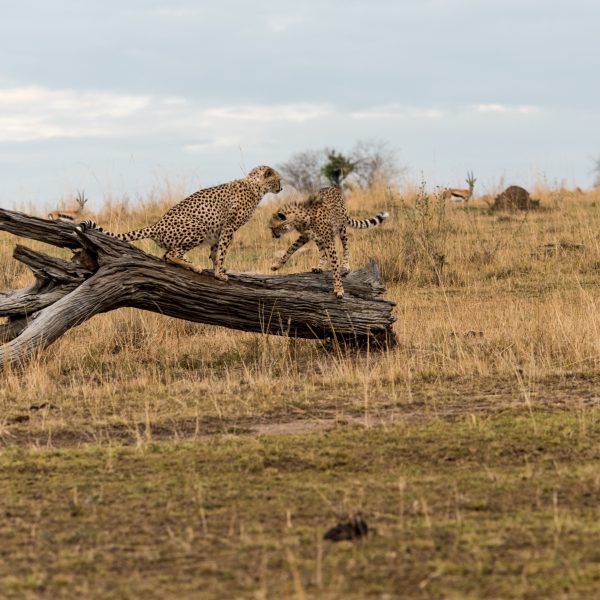 We were able to stay in one place because the other vehicles were still with the leopard in the tree (and now there were even more vehicles there). If you are able to sit still and keep quiet the animals quickly ignore you and you get to see unspoilt behaviour. In this case the cheetah cubs played chase around and over the fallen tree.

Suddenly the playing stopped and the cubs gazed towards the leopard tree.

We realised that the mother cheetah had appeared and focused their attention. We had not heard her of course! They gathered together and we followed them back to the area we had first seen them in. They were totally focussed on the middle distance. The leopard had come down from the tree and was making her way towards where the cheetahs were. A confrontation was coming.  We expected that the cheetahs would make themselves scarce. An adult leopard is too heavy and strong for the lighter framed cheetah and a real danger to cubs – even ones as large as these. So we were flabbergasted when the leopard flashed by us, in full flight, pursued by the four cheetahs.

It was fast enough to put some distance between the cheetahs and itself but it did not move off into the bush. It ran almost to the scrub but knew when the cheetahs had slowed. It is very unusual to get a photo of a leopard and cheetah so close together.

It stopped and then walked to the edge of the scrub where it lay down on the ground facing the cheetahs. Of course the cheetahs would be unlikely to risk an attack on the leopard even if it was lying down. The four of them could force it to move away from them but bringing it down was something else altogether.

The zoomed out photo shows the stand-off – the 4 cheetahs squatting on the open ground with the leopard lying to the left of the photo between the trees. But the leopard wasn’t going to give up that easily. It suddenly got to its feet and charged at them, scattering the group. The leopard concentrated on the cubs as it charged.

It wasn’t going to catch them but it ‘moved them on’. 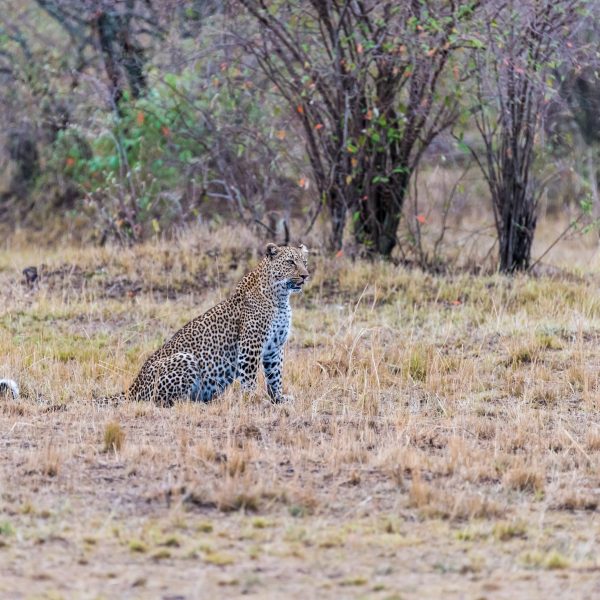 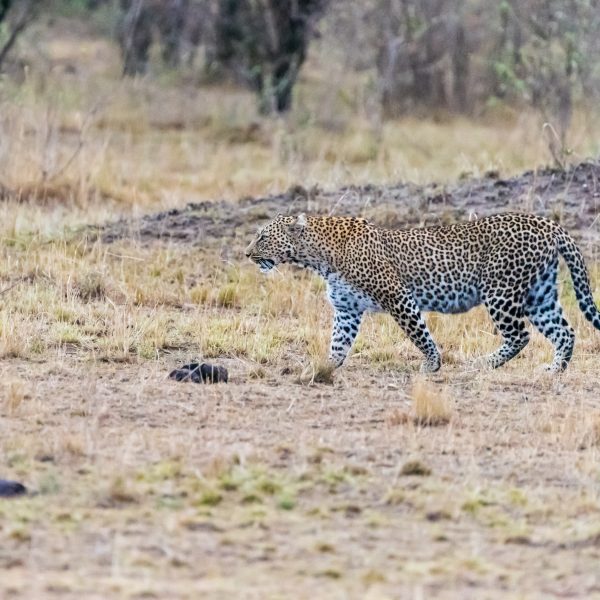 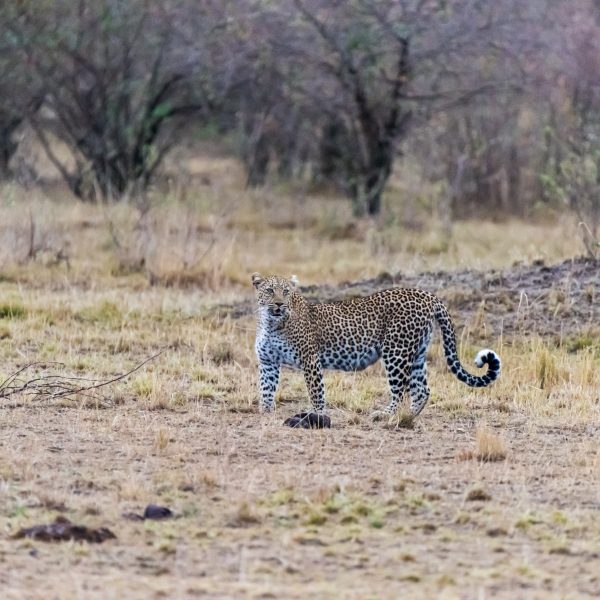 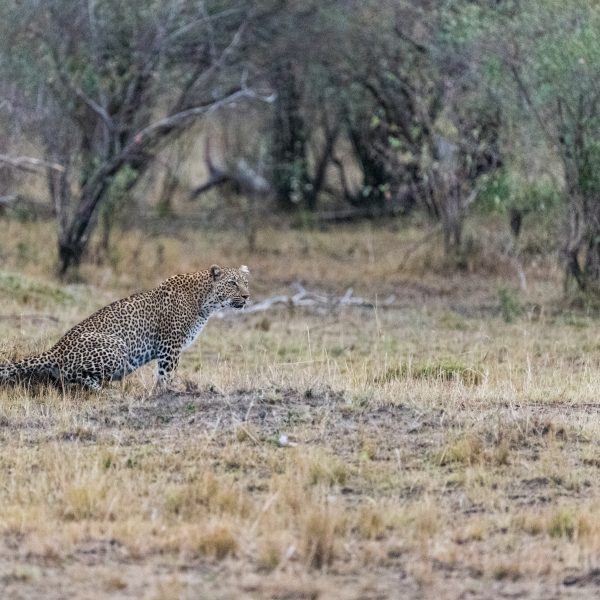 The cheetahs after a brief period on the mound decided to move away.