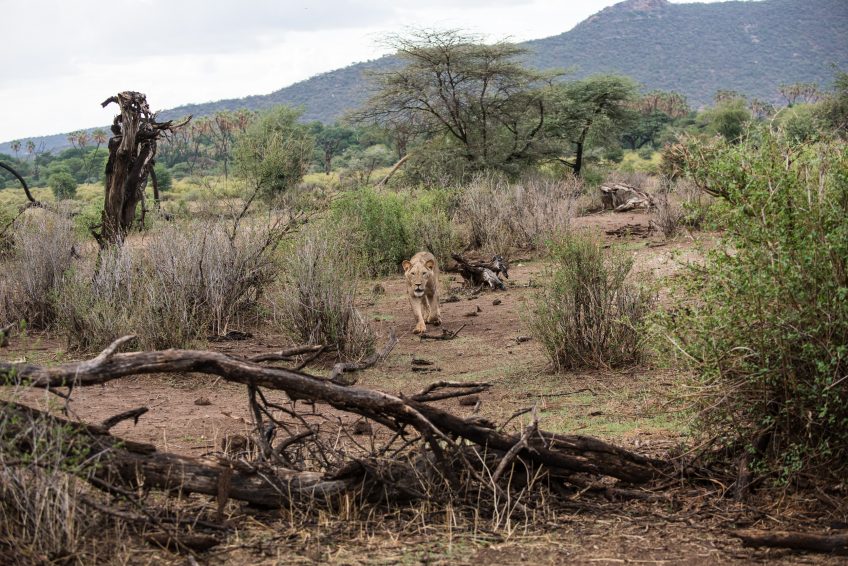 By the time we set off on an afternoon drive, the sky had clouded over.  Cloud cover produces rather flat light so not ideal for photographs but that is part of the challenge with wildlife photography.  You don’t get to choose the conditions in which you will see interesting things.  It was fairly quiet out and I was impatient but I know that it takes me a few days to get acclimatised.  Firstly, it is a while before I can pick out the shapes of distant animals.  It always helps if they move or swish a tail but its particularly important in the early days of a trip.  The driver points things out … I look and look (even with binoculars) … but I cannot see what he is looking at!  It is quite hard to give another person instructions for where to look.  Often I find that a clear instruction like ‘see the tall green bush in the middle of the group – just to the right of that’ – fails because I am looking at another group of bushes altogether! So although I am indeed looking at the tall green bush – it’s the wrong one!! It takes time and practice to both be on the same page.  Then, although I use my camera most days, it takes time to feel comfortable and confident in this environment.  A big part of that is knowing that if there is a photo opportunity it will be gone in an instant and the decisions you make will usually have to be really speedy.  My rule of thumb is ‘get something’ – no matter if it is badly focussed or badly composed – at least get a record to remind myself. Sometimes you can improve in editing but even if not at least when I look at it it will remind me what I saw.

So on this first afternoon it was definitely baby steps.  One of the ubiquitous birds in the parks are the guineafowl.  They ‘scutter’ around in the undergrowth and patches of bare ground,noisily raising the warning if there are predators around.  Often the photographic challenge here is that they are too close to the vehicle so you find yourself looking down on them or cutting off their feet!! But even though they are common they deserve a good long look.  They have stunning plumage. 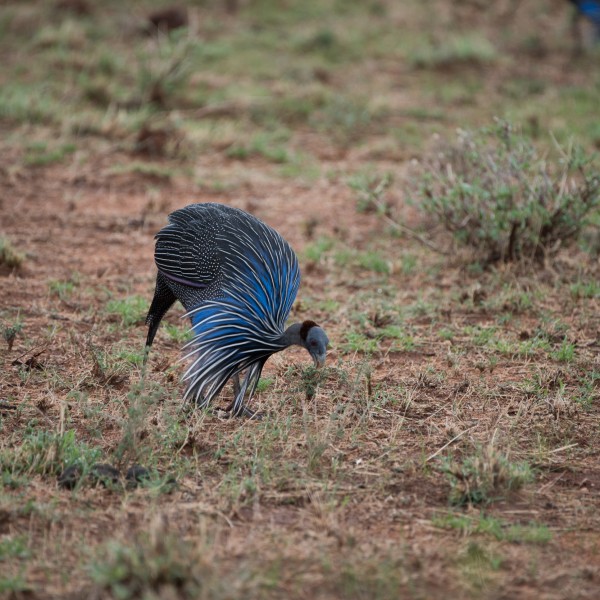 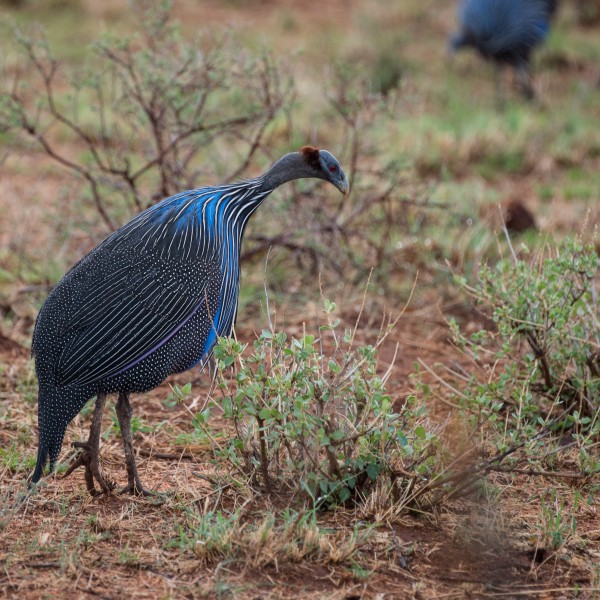 This guineafowl is found in arid and semi-arid areas.  I think it gets its name from having a similar head shape to a Vulture.  With its bare head and bristly russet hind-cap it reminds me a little of an abbot or friar! 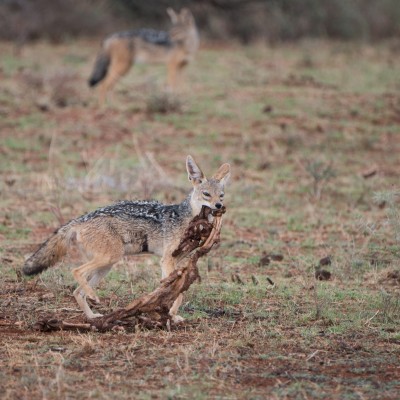 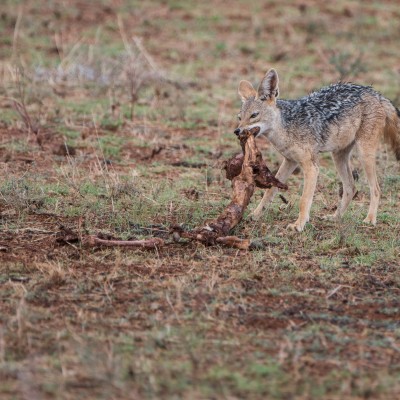 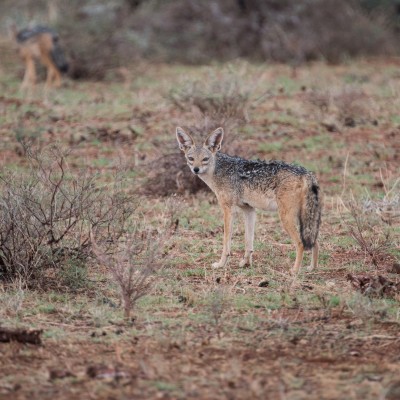 This black-backed jackal had a mate with it.  You can just see it in the background of the first and third pictures.  The remains of a carcase that it was dragging around was really only skin and bone but it was very reluctant to leave it behind.  At one point it dropped it and walked away a couple of hundred yards but then came back again and had another go at trying to take it away.  Eventually it did give up.  I don’t think it was losing much. 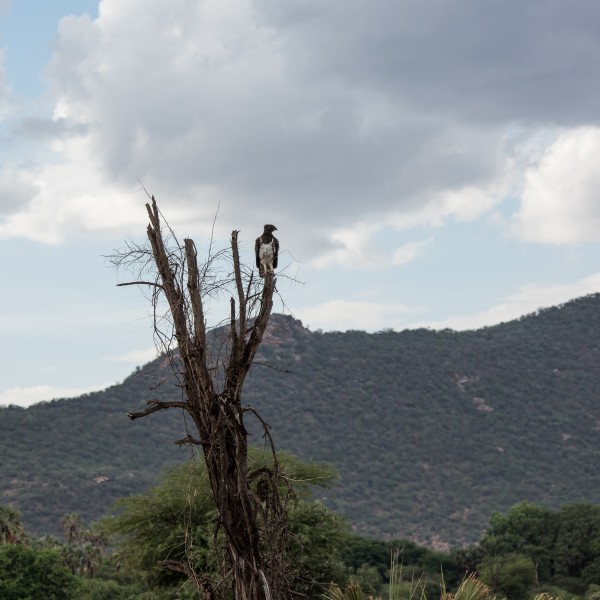 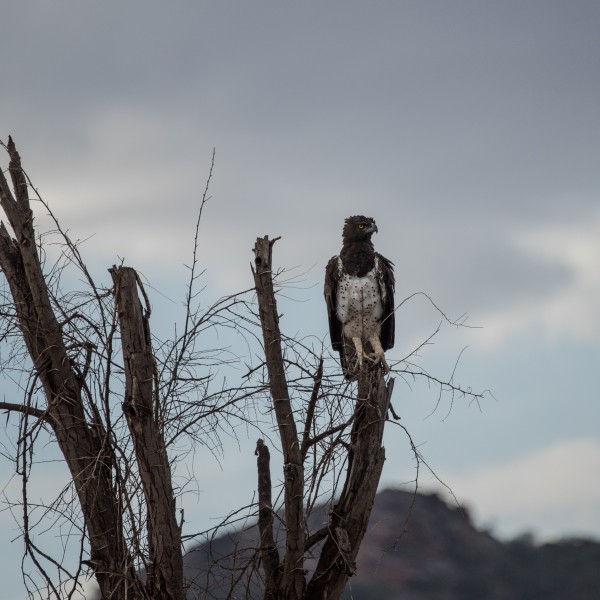 As you can see from the sky in these eagle pictures it was starting to look like rain.  Since there had been an extended drought and everything was bone dry that was no bad thing.  The Martial Eagle was some distance away and it was so striking perched on the branch of the dead tree against the hilly skyline and gathering clouds.  Usually they fly off before I get a chance to get detailed shots but this time it stayed put and I was able to use the Nikon 80-400 lens to really zoom in without us needing to move towards it.  It was even possible to close crop in the third picture so that you can see its beak, talons and breast markings clearly. Its piercing eye and ruffled head and neck feathers gives it quite a sinister feel.

Samburu has lions and cheetah but not in the quantities in the Masai Mara.  Consequently sightings are often limited and brief.  So I was made up when this lioness not only appeared but came towards us.  She turned off when she reached the fallen branch and went around behind the bushes but with a deft bit of re-positioning of the Landrover we were able to see her again as she emerged.  She started to come towards us again but then heard a noise to her left and turned on a sixpence and headed into the bushes to investigate. 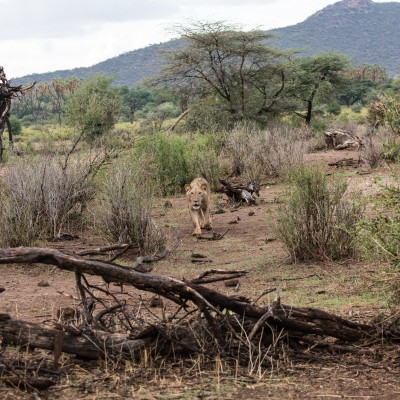 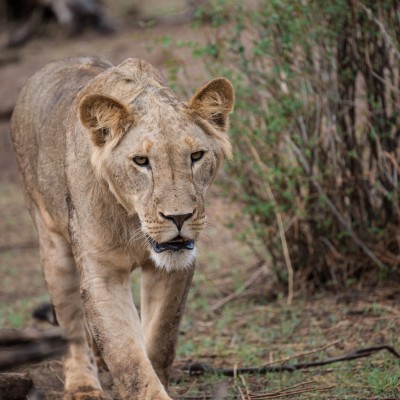 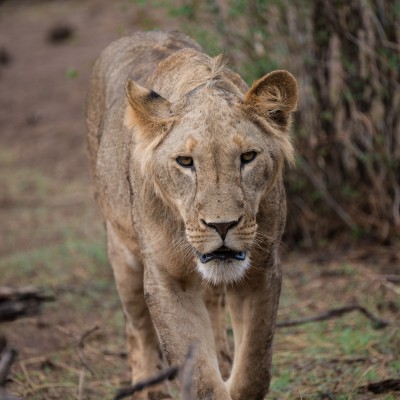 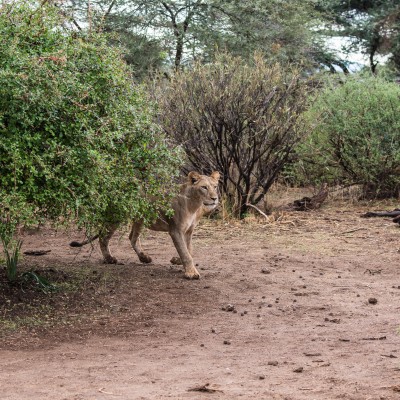 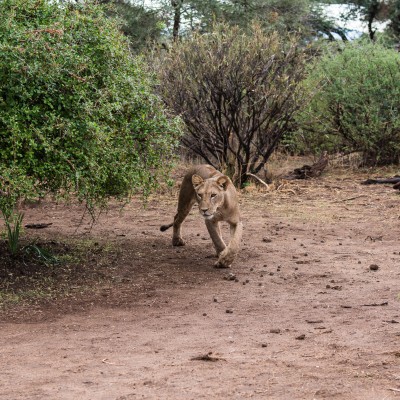 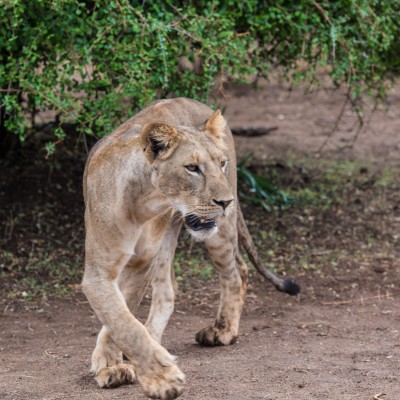 It is exciting to wait for a lion to appear.  In scrub bush like you have in Samburu it is all to easy for an animal to pass by unseen because they have chosen a subtly different route. What made it even more special was that we were the only people there at that moment.  One of the great attractions of Samburu is that there are fewer people than in the Mara. Lions in Samburu are smaller than the Mara – both in stature and weight.  They also seem to be lighter in colour.  This one seemed healthy and was moving quickly and with ease. 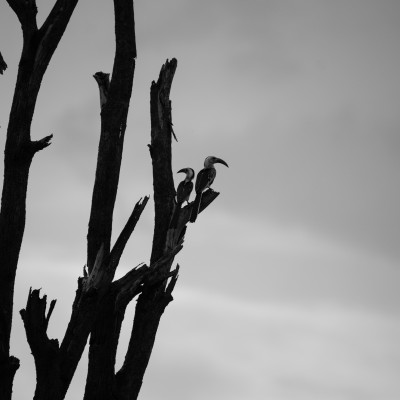 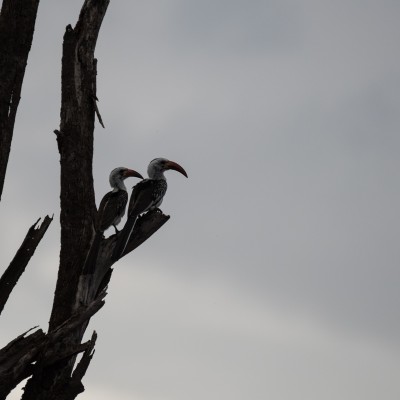 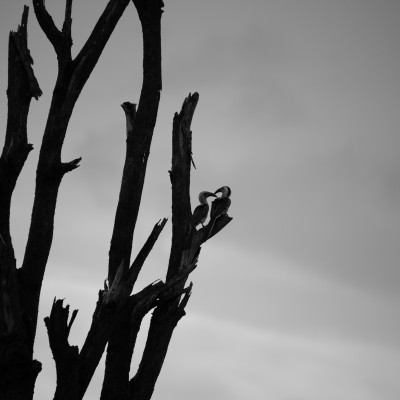 I realise that in these three pictures it is difficult to see the detail but I love the shapes.  They are a pair of the common red-billed hornbill. (For those into their birds I have better pictures for later blogs) and looked to me as if they were starting to court.  One reason for the lack of detail is that they were directly in front of us so I took a chance and shot the photos through the windscreen – which was not totally transparent because we had been driving around in very dusty conditions.  Yet another time when it turned out to be worth a punt. I am very impressed that the camera and lens combined so well under these conditions. (Shot with Nikon 810 and 80-400 lens).

The last pictures I have picked from this game drive are of a Grevy zebra.  Samburu is one of the few places where this zebra is found.  Characterised by its very thin stripes and white belly I think it is a really handsome animal.  The markings around its bottom are almost circles. 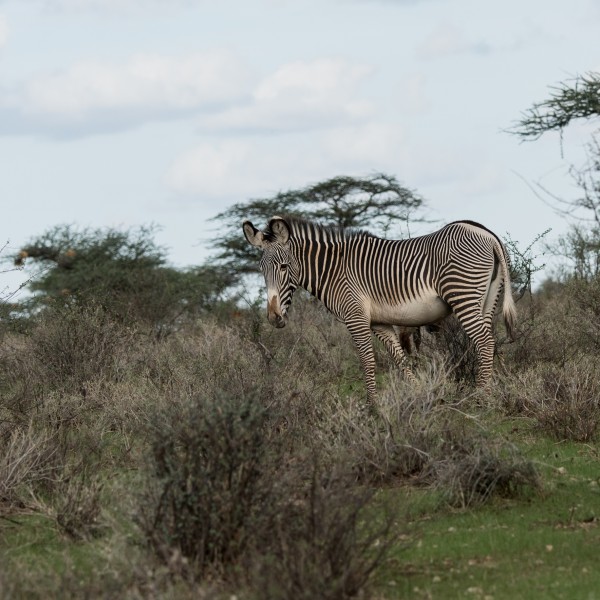 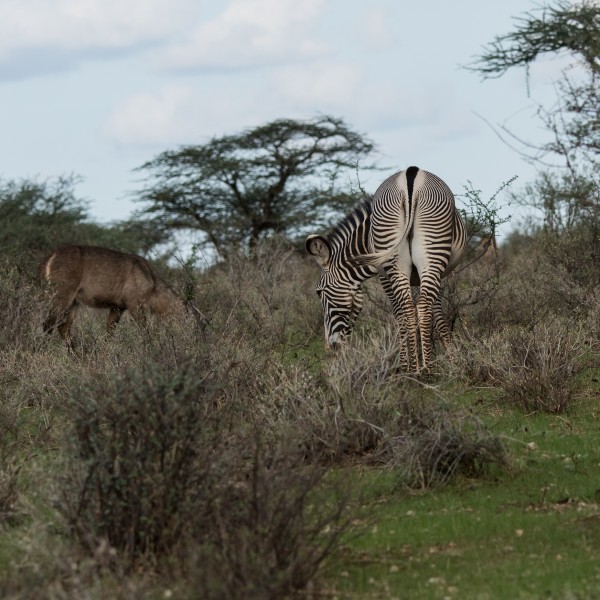