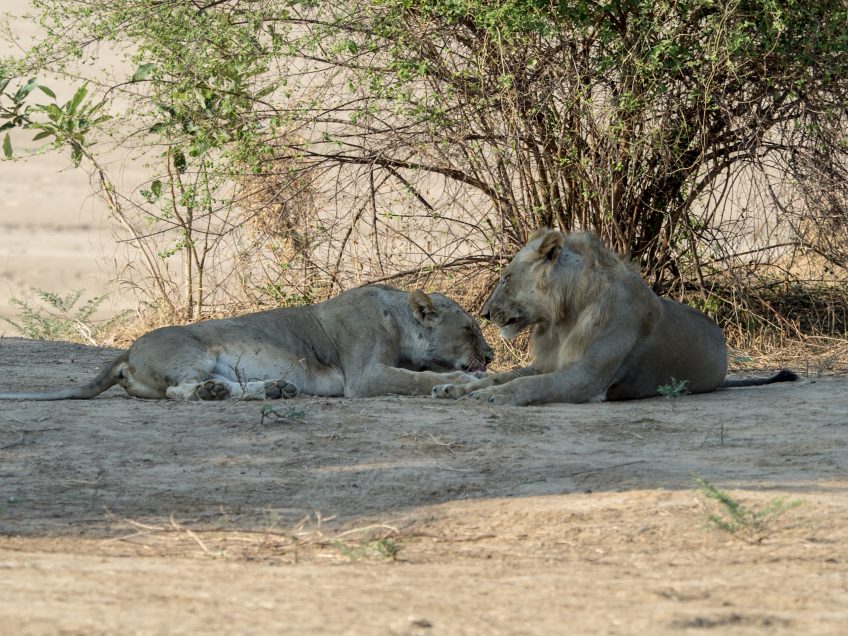 This pair of lions are resting between mating sessions and there is something almost tender about their pose.  I have watched mating lions often and in different settings but the action and interactions always grab my attention. This peaceful pair are well Into a mating ritual that will last several days. They may stay in the same area or move to a more secluded spot but it is a promising sighting as it means there is a good chance of getting good photographs. Of course there are plenty of other people interested and so lots of vehicles around. In South Luangwa though there are fewer vehicles than in the Mara and on the whole they were more courteous. Still … timing and position are everything.  A short distance away is the remains of a kill.

The hyenas are constantly checking the lions and when the female gets up and walks towards the carcass they do back off. But there isn’t much left on the carcass so the lioness returns to the shade. The hyenas return. I think this is more an assertion of power than a sign of hunger as the lioness would remember the carcass was finished.

There is enormous concentration of power in the act. The lioness was constantly alert, moving her ears as the sounds of camera shutters reached her. The position of her feet suggests she could push up onto her feet if she needed to. The lion was totally focussed on the act.

As the climax comes he starts to build a roar. I like this picture because it captures the response of the lioness – almost surprise.  It also contrasts the stillness of the lioness with the action of the lion.

Although it built into a roar it was not the loudest or longest I have heard. Disconnecting seems to be uncomfortable and often results in the female snarling. This pair moved off after they had coupled and we were able to follow them. They settled a short distance away.  This time the lion did not settle next to her.

I like the way the twigs frame the distant lion. In this shot you can see that in South Luangwa the male lions have smaller manes than the lions in the Mara. Their mane is also set further back and is mostly around their neck. He waits patiently for the lioness to indicate she is ready for the next coupling. She has chosen a spot in the shade.

It only takes the lioness to wake and stretch for the lion to feel it’s worth approaching. There is a strong sense of intent in the way he comes over. But all the power is in her hands. She is on her feet and moving off before he reaches her.

The lioness moves towards the road, parallel to our vehicle. She is walking with a confident measured pace. She knows the lion will keep following her.

And he does follow but to our amusement he stops and appears to growl at his tail! It’s likely a biting insect avoided the swishing tail. But, having dealt with his errant tail, he resumed following the lioness.

She crosses the road right in front of our vehicle. I like this shot both because it reminds me of a pretty close encounter, and because she is quite happy ignoring us. She moves into the brush to our right and the lion followed her. It was time to leave her in peace.