Tall Day / African Diaries / So much to see in the Mara 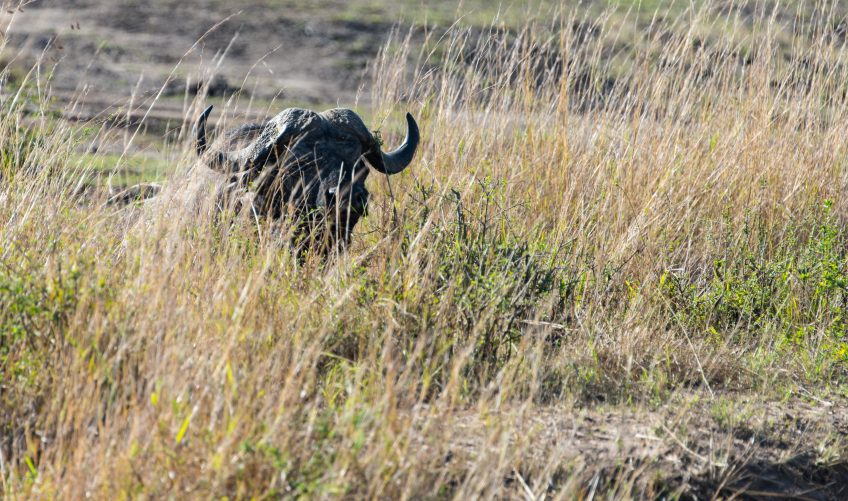 It had already been an amazing morning – with the confrontation between the leopard and cheetahs. There were plenty of other animals around us. Looking through the other photos for that day, I was struck by some of photos that didn’t make my first cut. When you take so many photos on a trip you have to select the ones you want to share fairly ruthlessly. I use Flickr as a base for sharing because it is ‘inhabited’ by photographers. The downside is that I feel  bound to only submit technically good pictures or amazing ‘snaps’. Or sometimes, when I have shared a trip, the pictures that others might have missed or that captured their experience. Many other decent quality photos stay on my PC. That is also why I have been keen to use a web site because I can use photos to tell a story. I think it is the writer/storyteller in me! There is so much wonder and emotion in each day out in the field. Seeing a picture reminds me of the actual event and I am always astonished at the range and depth of things that come back to me. Like I say, looking through the photos there were several that didn’t make the initial cut but were lovely to take.

For example, there were a lot of Topi on the plains. Now, they don’t do exciting things – they mostly eat and walk – but they have an interesting shape and gait. On this trip I became interested in the way the flat landscape meant you could get ‘skyline’ pictures which are quite evocative.

I like this because you get a strong sense of the shape of the Topi with the smooth blue-grey sky behind it. Its hump is clearly visible and a strange feature. But I also like the way the sharp,dry texture of the grass comes through. I was lying on the floor of the land rover to get the angle. At this time of the year there are also very young calves.

The light here is lovely and the photo has a fantastic variation of browns and golds. I watched this young topi gambolling around before it went and stood next to its mother. Cropping in would give more detail but here I wanted to have a sense of context so I resisted the temptation. The area is vast compared to the little topi. The blob top left is actually a hot air balloon.

The acacia tree on the left is a typical Mara shape. I loved the way the branches crossed over directing the eye. There is an eagle perched on top! From this distance hard to identify but it is a shape that breaks the natural line and cued a look through binoculars. Often when I get back I see things I didnt see at the time. In this picture it is the horns on a scull in the middle of the grass!

There is something particularly beautiful about having the sun light the plain briefly when the sky is heavy with rain. There is a contrast between the power of the impending storm and the peaceful grazing of the zebra.

These moments are also special. I am so grateful for a 400 lens so I could catch this without disturbing her. I think the pattern of marking on her face is exquisite.

The light makes such a difference of course but it is also the luck of seeing something arresting in a great context. A little later on the drive we came across a family of Egyptian geese. They aren’t rare and indeed we can see them in England. Here though, because we were in a stationary vehicle, they went about their business with little concern once the sound of the engine turning off had died into silence.

Here she is moving away from us quite quickly. Again I love the contrasting textures of the sharp stones and the blurred but spiky grass. The ripples and reflections add more interest. You can feel the urgency in the action of the final gosling. But we were patient (there was an egret fishing further upstream for me to watch and photograph) and after things settled down the goose led her goslings back past us.

Not many options for capturing this – you can see the edge of the land rover’s shadow – so I had to shoot from above. I love the lifted foot. It looks as though she is doing a catwalk walk! So upright and proud. The goslings fed as they walked. I had also caught the head of the second gosling down at the water between the front gosling and the goose.

I like the way the goslings are moving in double file like a school outing! I was also struck by the way the clump of grass is coming up through the reflection. Normally I would be irritated because it broke the line but here it draws attention to the beautiful mirror image with the ripples just reaching it. Seconds later it was broken up.

These starlings are everywhere. But this one posed on a stone that was beautiful in its own right. The texture and patterns and dry sharp grass is the perfect backdrop. Because the starling was still and turned away you can see its elegant shape and for me the greatest thrill was capturing the iridescent plumage, highlighting a fabulous Mediterranean blue colour.

This buffalo was grazing and completely obscured by the grass. If you look behind the head you can just see the rump but without the head you wouldn’t know it was there! Suddenly this big head appeared. It is stood in a gully so it couldn’t charge us but even so there was a kind of defiance about it. You would not want to be on the receiving end of those horns.  A contrast to the next little creature.

Banded mongoose are common but you usually see the back of them as they move into cover or a streak as they race across the road! This was my best ever sighting. The mud mound shows it off really well. The back legs are very powerful and the long tail is strong. It has a slightly rough coat. This was an area of open ground and, if you looked hard there were foraging banded mongoose everywhere.

This is a different mongoose to the one in the first photo but I was struck by how different it looked when it moved across the open ground. It has an almost stalking attitude. Another one caught and ate a small rodent and was clearly not impressed by our close proximity. It really isn’t ‘cute and cuddly’! They keep look out by standing on their hind legs – very like meerkats. 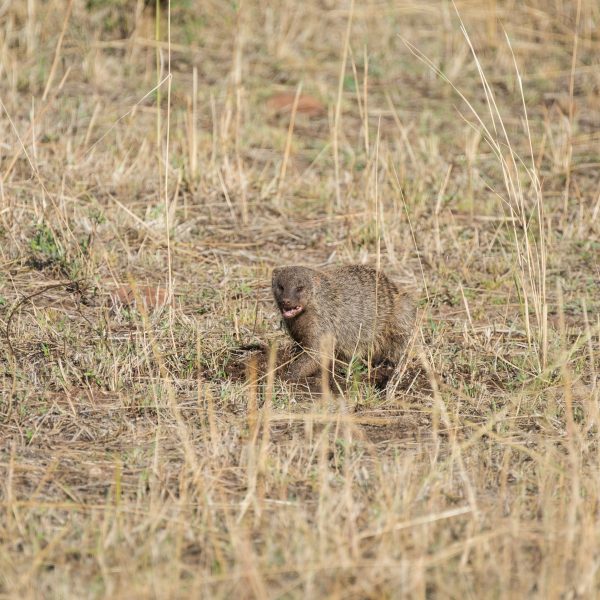 They were very entertaining to watch – constantly moving, running, popping up onto their hind legs. More from this amazing morning’s game drive in the next post.