Tall Day / African Diaries / More cheetah and leopard – but never too many! 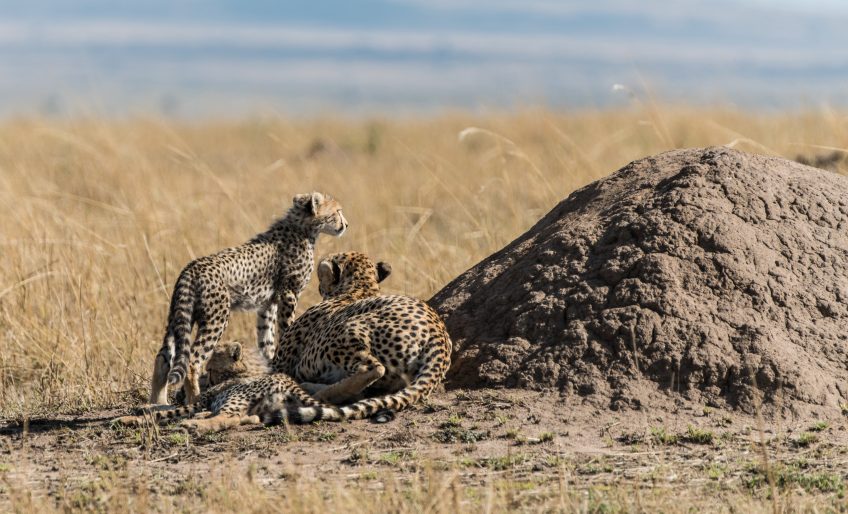 The morning of the 24th October had so far been totally amazing. We’d seen cheetahs playing,leopard chasing cheetah and cheetah chasing a leopard, lots of plains animals, touching moments, birds and banded mongoose. But the morning wasn’t over yet! As we moved on we found a delightful cheetah family – mother and 3 really young cubs. We initially came up behind them and they were looking out over the plain.

We were able to move around without disturbing them. This shot of two of the cubs side by side in an identical pose is lovely. The legs are so long! The third one was behind mum.

But it is in exactly the same pose. I love the way she is looking back at it. They are animals so I need to be cautious about attributing human emotions but it feels affectionate.

We tried to work out what they were so intent on even when they settled down again. There were gazelles but they were some way off and there was no cover between the cheetah and the gazelles.

We watched for sometime and they changed position a few times. One of the cubs went on a small expedition. I am shooting into the light but that has the advantage of allowing the light to catch the baby fluff on its neck. Its ear is turned back to catch sounds from behind. I’m not sure if it was picking up sounds from its mother.

It watched some birds feeding on the dry ground and then slowly and carefully raised itself and stretched out into an unmistakable stalking stance. I like the tension in the muscles and the sense of it carefully placing its front paw. The head is low and in line with its back and it is completely focussed on its ‘prey’. Of course the birds flew off – no competition! But a promising start to building the right skills.

We left them settled down again in the long grass. So far on this day we had great sightings of a leopard out in the open – luck was on our side. More often though leopards are up in the trees or skulking in the scrub undergrowth. You need sharp eyes. Without the guide ( even knowing what I was scanning for!) I would not have spotted this cub.

You can see how well the spots camouflage it amongst leaves. This is not one of the cubs we saw at the rocky den. It is another leopard family. There is just the one cub this time and it is very, very young. Mother was close by but also well hidden. What an end to an amazing morning.