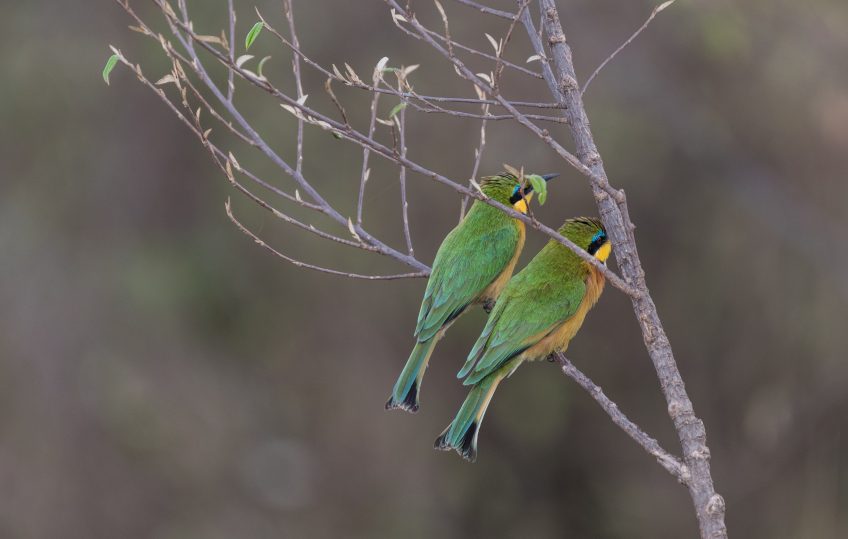 It was a quiet afternoon after such a full morning! It is often like that. You can drive around for a couple of hours and really not see anything very much. It isn’t a zoo so the animals could be anywhere in a huge area. You pick a route and see what crosses your path. It is actually one of the things I love about safari. The fact that you may see nothing puts the extraordinary experiences of the morning into real perspective. Of course there is always something to see – wildebeest, gazelles, zebra, giraffe and birds. On this drive we came across little bee-eaters perched on a branch. Perversely I like the picture of them perched with their back to us. It shows off the colour and texture beautifully. I like the pale grey of the twigs and the way the birds are threaded through them.

They obligingly turned around a little showing off the curve of its bill and iridescent ‘eye shadow’. The breast colours and sharp tail markings are stunning. I think these are my favourite birds. They somehow have twinkly eyes as if they have a sense of humour.

The other birds on this drive that captured my imagination were the ox-peckers. They are a regular all over the Mara, hitching a ride on buffalo and hippos. Here first two meet on a buffalo and then they are joined by a third. It amused me because it seemed like a party!

The next photo is of an agamma lizard. I think the brightly coloured ones are male but I might be thinking of some other type of lizard! It is fairly iridescent in the right light.

I know you are expected to photograph from the front but I really love this one. It makes me want to see what is on the otherside! It is like a commando that has wriggled up on his belly to get in position to check out the position of the enemy. And isn’t the rock amazing? Fantastic pink and grey tones and delicious textures. Of course it is quite a small rock but because the lizard is there it looks like a cliff edge.

On the way back to camp we came across our three cheetahs. We were on a path raised a little above the plain and just off the path was an old termite mound under a tree. Behind them the land dropped away to the plain which spread off into the distance. 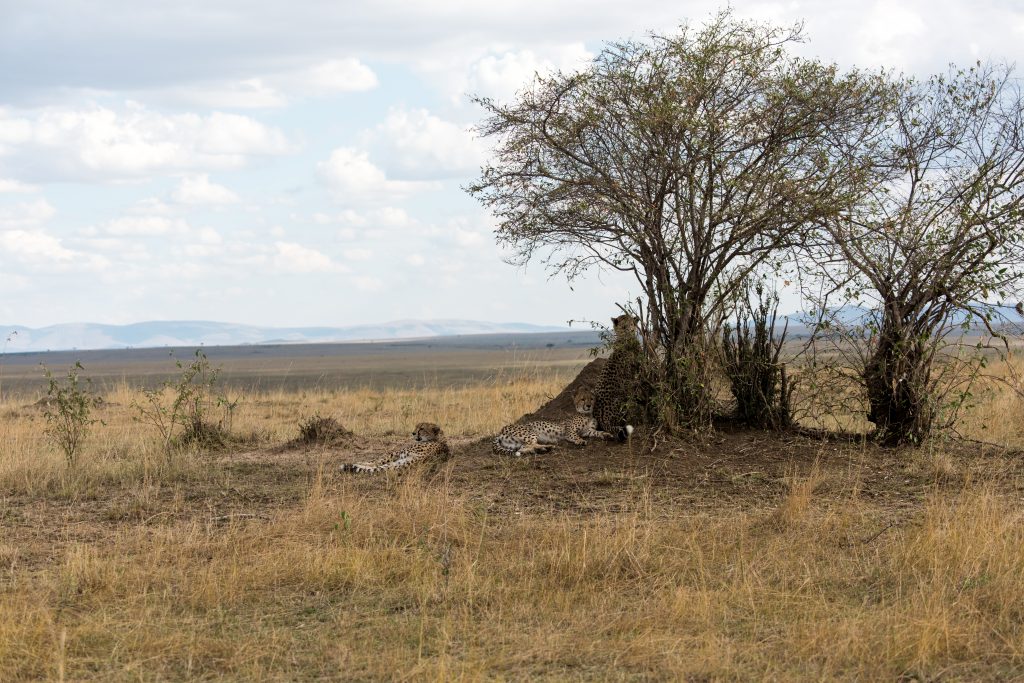 They weren’t doing anything interesting but it’s a great setting! Actually looking more closely at the picture below I think that the mother may be laying down in the back between the mound and the tree and facing out on to the plain. Apparently they really like this spot – I guess it gives them a good view of the locale and in the heat of the day there is some shade here.

One last brilliant moment from this afternoon drive. An earlier post had some close-up pictures of the ground hornbill and I mentioned in that blog they eat insects and seeds by tossing them up and swallowing from the air. Well this time we saw one catch and despatch a snake! The snake shook and wriggled but that beak is really strong!