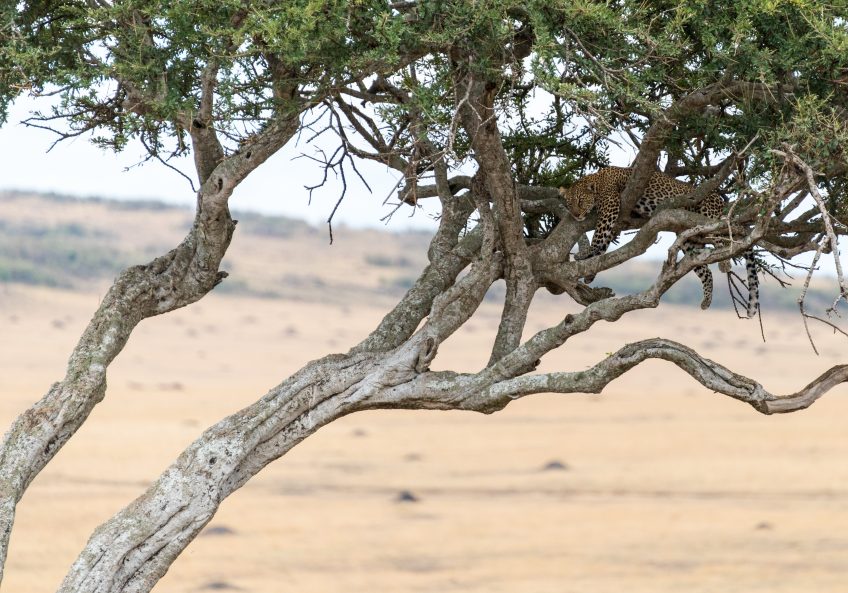 We were on our way back to camp for lunch when we saw a group of vehicles lined up by a tree. Worth a look – and sure enough there was a leopard up the tree.

This particular tree stands in a vast open area. Just like with the lions you need to look really hard to spot the leopard. You are looking for a tail twitching below the branches or a movement that causes a branch to move. In the picture above the legs are over the branches just right of centre. It is facing towards the right.  The body is hidden by the greenery. Just above the rump, in the greenery is a fawn coloured dot that is the hidden kill.

Even when you zoom in or look through binoculars the leopard is very hard to find. We wait and it turns around to face the other way. Now, in the picture above, you can see the gazelle hung in the branches directly above its shoulders. The leopard’s face is still obscured.

I have included this more distant picture because it illustrates what I mean when I say you are looking for its legs or tail hanging down. From a distance they are beautifully camouflaged and look like branches and twigs.

The tree was a great shape and I felt there was a chance to watch the leopard come down. That needs some explanation I think. Often when you find a leopard in a tree that tree is a thick trunk growing out of dense scrub. When the leopard comes down it is able to descend behind the tree and is hidden for much, or even all, of the descent. Here, if we were well positioned, we had a good chance of watching the whole thing. Fortunately with Freeman Safaris if you see something special you can simply stay out. I had a vehicle to myself so I was not inconveniencing anyone. I opted to stay. Others went off for lunch so for a couple of hours we had peace and quiet! The sky changed and there were great cloud formations. The light changed and there were great moments when the leopard moved … maybe this was the moment … no – false alarm! It got really hot but once you have waited for a couple of hours it would be foolish to miss the action. You just know that when you move off it will come down!

There were opportunities for slightly better views as it woke from time to time! The time passed and those on their afternoon game drive returned and lined up all around. The park wardens moved people back up onto the road. We had a permit so with a minor adjustment of position we were allowed to stay where we were. The leopard was still staying put! But occasional bursts of sunlight gave opportunities to get a picture with atmosphere.

But, as the light faded and dusk approached, the patience paid off. The leopard we were watching is the one described in the earlier post with the two tiny cubs. As the light faded she was keen to get back to them.

As she stands up the place goes mad – the vehicles race down from the road to the area around the tree. We stay a distance away and briefly my composed shot is ruined by a vehicle positioning under and behind the tree! Fortunately another vehicle gets it to move. I am struck by the beautiful shape of the tree and how it frames her as she moves down the branch. As usual she comes down head first. She must be digging her claws deep into the bark to descend under such control.

This late in the day and positioned as we are I am now shooting into the light so there are some limitations to the quality possible but I want to document the action – I want to remember what I saw – I don’t mind if it isn’t a ‘wall’ picture.  It is worth sacrificing the light for the beauty of the shape of the tree. She moves down quickly and repositions at the fork and thankfully she chooses a route facing us. All the waiting is worth it.

I know as she moves onto the main trunk a jump is coming but it’s hard to anticipate when. And what’s happening is happening fast. It takes less than 90 seconds from start to finish!!

She pauses for a split second before she jumps. The push off for the jump is very powerful and she stretches out fully as she reaches for the ground. She lands lightly and is immediately aware of her surroundings.

Then she heads in the direction of her cubs. What happens next is very sad. The vehicles are forming a barrier across the route she has chosen. She waits but no one moves and there is a lot of excited noise coming from the vehicles even though she is moving near to them. (I can hear the conversations even though I am parked some distance from them.) I totally understand the excitement and that people want close up photos but their close proximity and positioning causes obvious distress. She stops and looks back at the tree. Safety over-rides the need to check on her cubs.

She heads back to the tree. She is able to scale the tree in a few powerful bounds, pushing up with her hind legs and digging in with her front paws.

She pauses at the fork and looks out at the line of vehicles – so they should have got a good shot – but I can’t help feeling she is sending them negative thoughts! Maybe she can see across to her distant den.

Then she turns her back on them! There is something poignant about her gazing out across the plain.

By now it is very late and we need to get back to camp before it gets dark. We drive down and round behind the other vehicles which are also peeling off. As I look back at the tree the sun catches the scene and I get my favourite shot of the day.