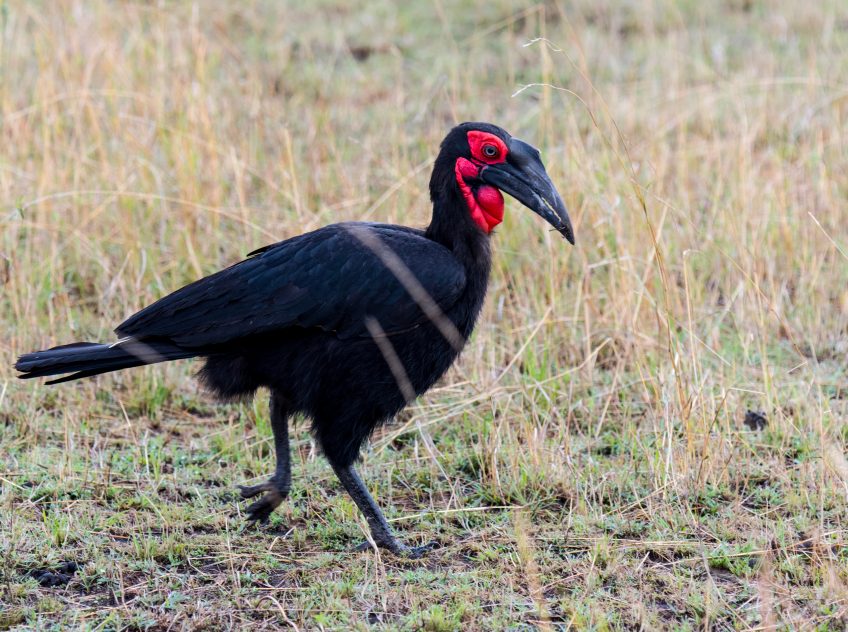 There are birds and then there are birds! Of the strange looking ones the Ground Hornbill must be right up there. The size of a large turkey, it struts around on the ground like it owns the place! It can fly but usually only up into a tree. The first time I saw one in a tree at its nest I was amazed because I had never seen one fly and assumed it was bound to the ground!

They are usually walking across from  left to right (or right to left!) and catching insects both from the air and ground. They toss their head back to send the insect down their throat. But this time I managed to get a couple of front shots and you can see the bright red, folded skin around the neck.

But I had not appreciated how long their eyelashes were until I had a close look at the photographs when I got home! They almost rival the eyelashes of a giraffe!

This particular trip to the Mara was wetter than usual and there were a huge number of frogs that suddenly appeared. At one point, during a long afternoon downpour, the tarp outside my tent formed a shallow ‘pool’ and when I unzipped the tent door I was confronted by hundreds of tiny, tiny frogs … many eager to come in!! There were frogs everywhere – all across the path, up the grass,  around the tent and even in the tent. For days out in the Mara, as soon as you were near water and turned off the engine, you could hear them everywhere.

Of course the frogs were a tasty treat for birds especially kingfishers. One bird that you often see in the Mara is the hamerkop. So named I think because of the shape of its head. I have watched them fishing before but this time they were catching frogs (or maybe toads – I’m not up on my reptiles).

Catching them was easy but managing them needed real expertise. Often they were really large and strong. The frogs would flatten and inflate and wriggle and kick out.

The hamerkop could open its beak let the frog go and catch it before it hit the ground and in the process readjust its grip.

Interestingly the hamerkop would also repeatedly dunk the frog in the water before eating it. I wonder whether this was cleaning it or drowning it.

When it did manoeuvre the frog into its mouth it swallowed it whole and you could see the lump in its throat. On this morning drive there were several more ‘stories’ so more in the next post.