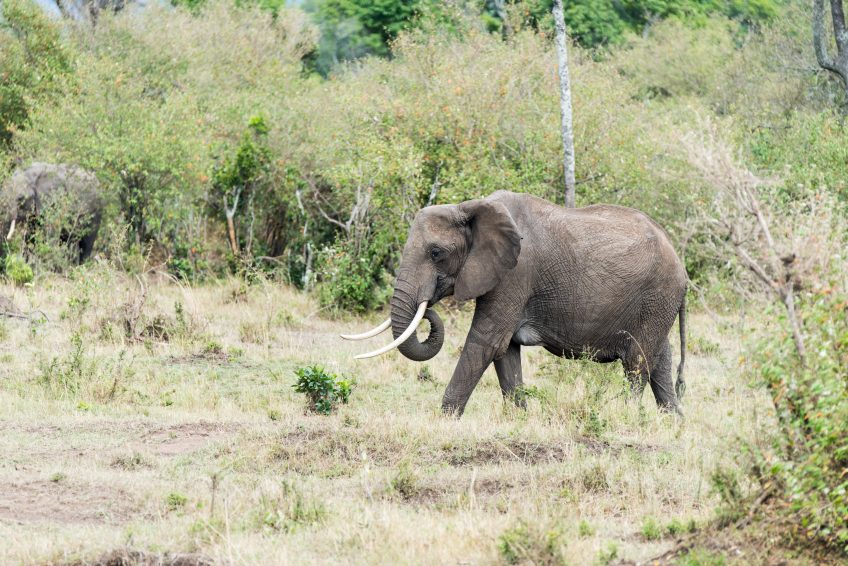 OK not both at the same time but on the same morning!

Elephants out on the Mara plain are easier to spot than lions but at a distance, especially if they are stationary and partly obscured by bushes or scrub you can mistake them for hippos or rhino or at a push large buffalo! If they are on the move though they have an easily recognisable gait. We saw two lots of elephants on this particular morning. One was a lovely encounter with an female with an older calf and a newer, smaller baby.

One photo that I really like is this one. The baby inserted its trunk into the mouth of its mother. I’m not sure why. It’s not something I have seen before.

They were unconcerned by our presence and were fairly close to the vehicle at one point. Then they turned to walk away. I quite like photos of rear ends – I like the feeling that they are going off into the wild.

But when the shutter clicked the mother spun round really quickly and faced us down with ears spread. She wasn’t really threatening us but it was an impressive response. It is easy to forget how mobile and fast they are when they choose.

I have chosen to include pictures of the second group of elephants because you can clearly see how they wind their trunks around the tufts of grass, then pull to one side and up to get it free from the ground. 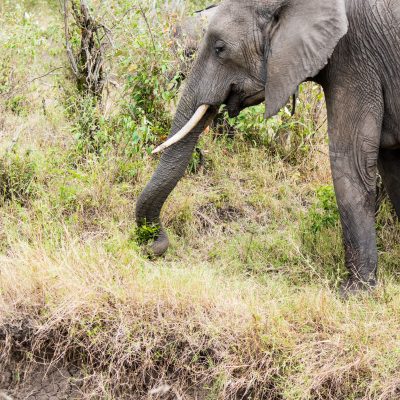 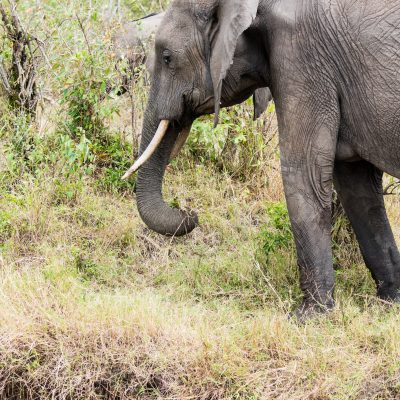 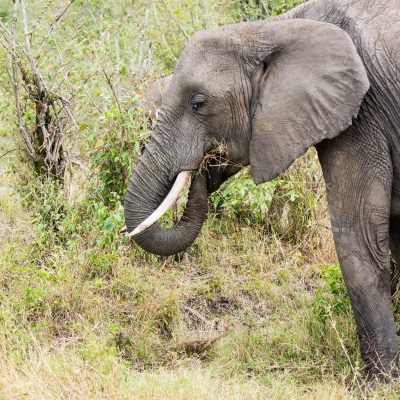 I like the next picture because it made me appreciate how long the trunk is. Usually trunks are curled up a little, wrapped around something or in water. Laid out straight like this it is even more impressive. She was scenting the ground ahead. They were quite fussy about which things they chose to eat.

The other story with this group was that we could see a large prone elephant in the background. It lay very still and even with binoculars we couldn’t see it breathing.

The other elephants ignored it and we became very concerned. We were there for a long time. Fortunately all was well. As the last of the group passed by it lumbered to its feet and followed them.

Hyenas are complicated animals and in their own way fascinating. They can hunt and kill if they need to. They mostly scavenge though and I have seen them steal a complete carcass from cheetahs. Most often though I have seen them with scraps of a kill. Today’s sighting was a hyena carrying quite a sizeable piece of a carcass. We saw it trotting across the plain in front of somewhat bemused wildebeests and a warthog!

We managed to anticipate its route and positioned ourselves so that it would be coming towards us. The kill it was carrying was quite large and heavy. It did put it down briefly a couple of times but they have incredibly strong jaws and knock muscles.

It took quite a long time but it took the carcass back to the den. What happened there was interesting. The meat was given to a young but pretty much full grown hyena. There was a much smaller cub there lying in the grass but there was no sharing even though the small one was calling.

It tried to slide in close to get scraps but even getting close elicited some pretty aggressive biting and snapping. It kept trying to get some but unsuccessfully while we were there.

As we left a hyena head popped out of a hole in the ground! Great final photo op. It looks like it’s squinting at us!

We were heading back to camp but then on the way we heard of a leopard in a tree! So we had to go see… (next post)