22 October afternoon drive in the Mara 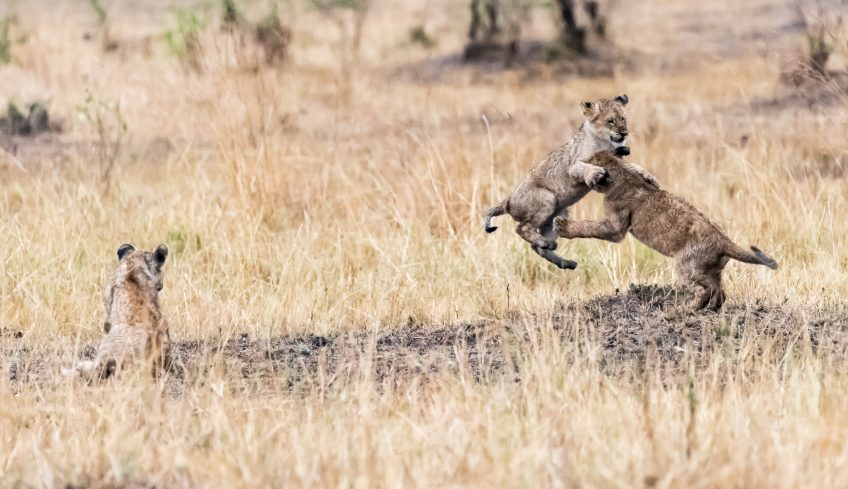 It had rained on this afternoon and the light was low when we went out. We found a couple of lionesses with three cubs. The cubs are still wet from the rain but they were very lively. Initially one of them just sat and watched while the other two leapt at each other and engaged in play fighting. 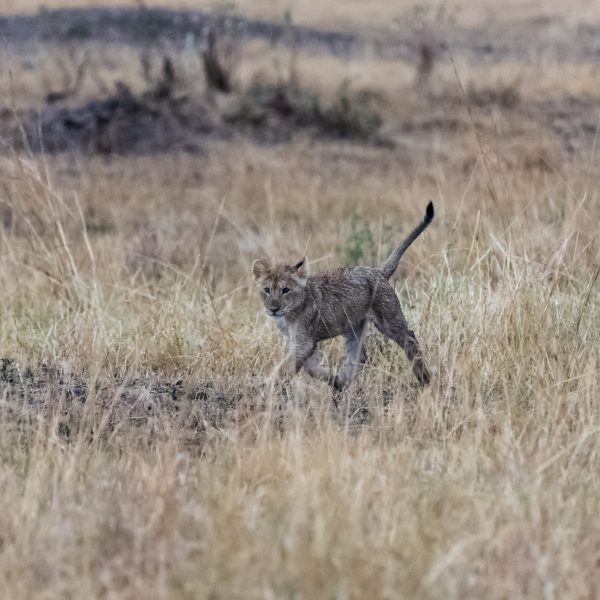 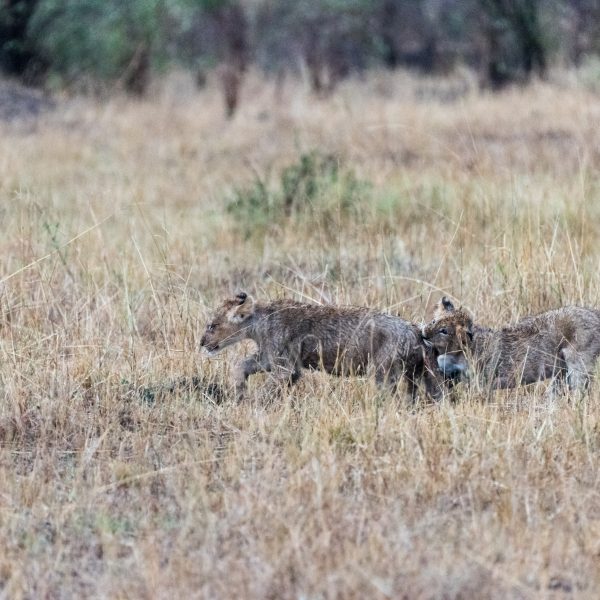 Most of the play could be seen as similar to the skills used in catching and securing a kill. Stalking each other and then creeping up behind and grabbing the tail. Or trying to jump on each other! They were very athletic and at several points jumped quite high but retained balance and strength.

They were way to small to manage live prey – even a rabbit – so they fixed on a large piece of wood which they fought over. This involved batting it and shaking in their mouths. 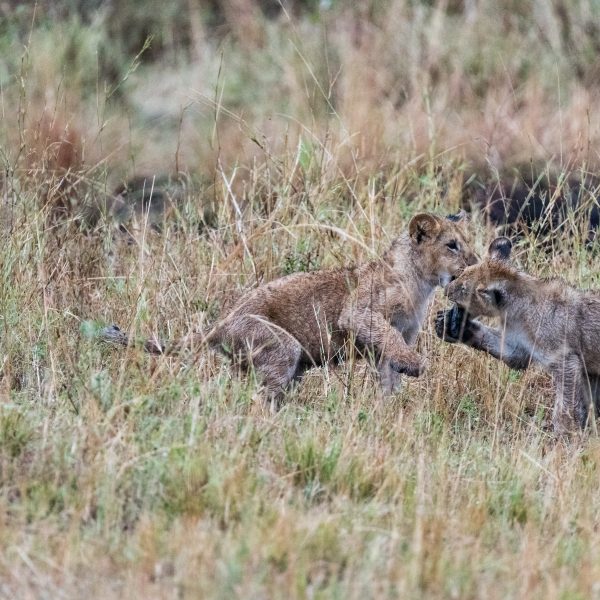 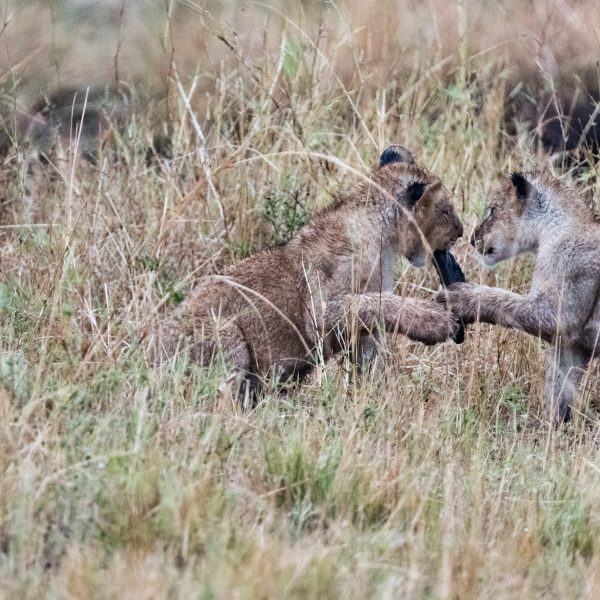 Then they found an awkward twig that had a narrow stem but opened out into several branches. One of the cubs became very protective of it and carried it backwards and forwards avoiding the attention from the others. 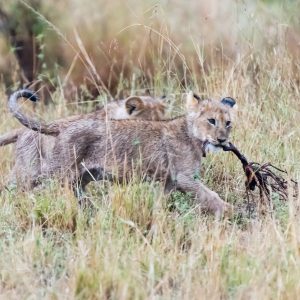 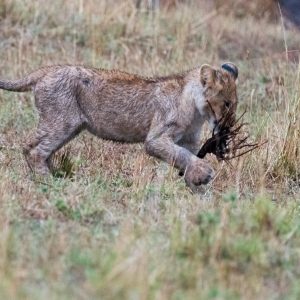 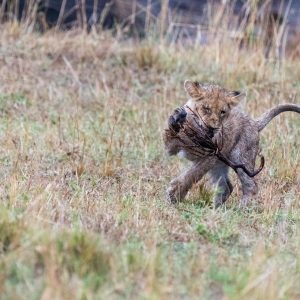 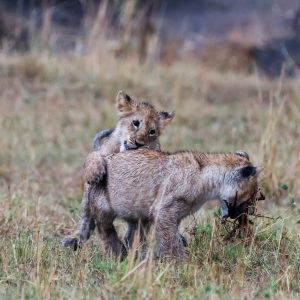 Occasionally things got boisterous or the small cubs were a little too daring with older lions and then there was a quick ‘reprimand’. The older lion put its huge paw on the head of the little cub and pushed it down to the floor. A position, I think, of submission.

On the other hand the cubs would copy the adults. I love the picture of a lioness and cub standing together, focussing on the same thing and having the same stance.

While we were watching the cubs play we became aware that one of the lionesses had got up. She walked languidly towards our vehicle. There was no rush and she didn’t pay any attention to us. Part way across she stepped up onto a hump in the ground and put her nose to the ground. In a split second she had pulled a warthog out of the ground! Maybe she had seen it go in before we arrived and had waited patiently or maybe she could hear it – we certainly couldn’t! – but whatever it was the action was so fast and efficient… the warthog didn’t stand a chance.

It wasn’t a big meal but it would certainly stave off hunger pangs. It was a big warthog and difficult to carry and to manoeuvre as she carried it back to where the other lioness was sitting. 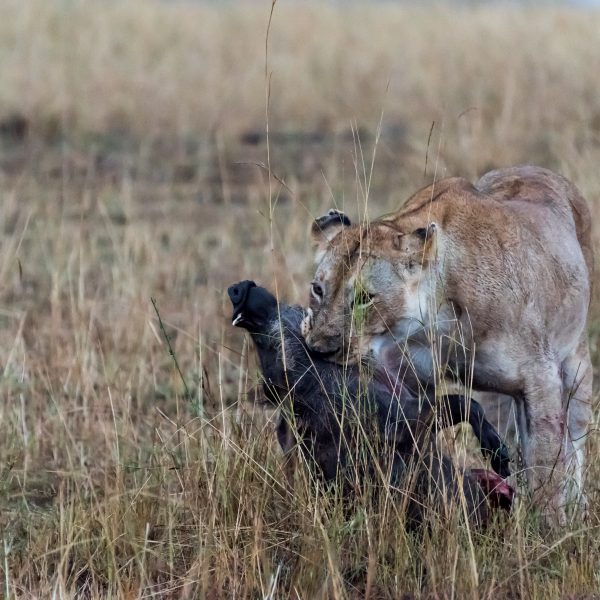 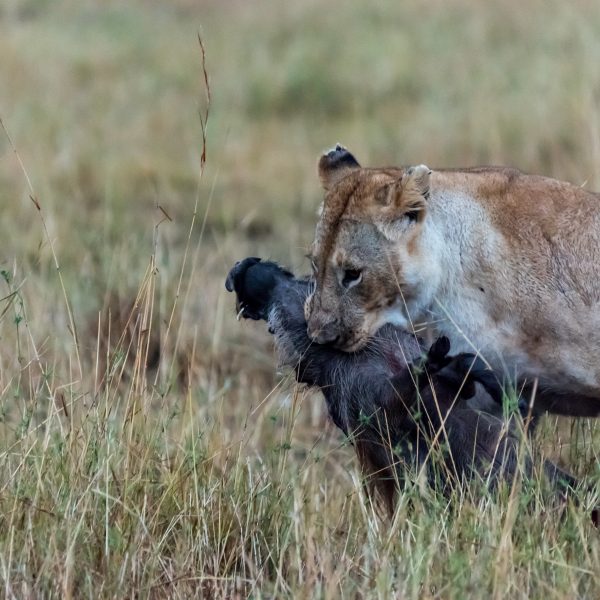 And then, a further twist to the story, out of the bushes along the back came a big male lion. It simply took her kill! Just like that.

And it didn’t share either … it took the warthog off into the bushes and the lioness went and sat down again!