22 October morning drive in the Mara 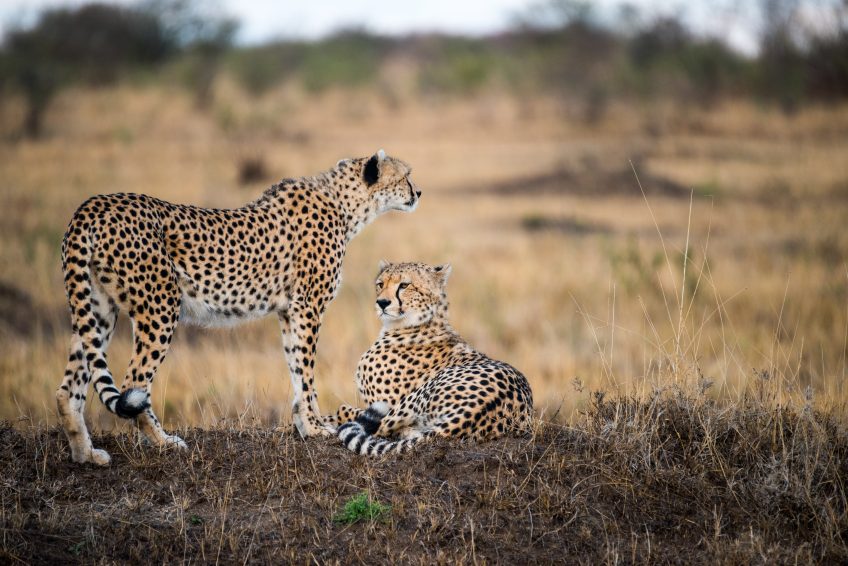 After such an amazing evening drive it is important to reset expectations. The Mara is not a zoo. There is no certainty that you will see particular animals and seeing a kill, or cats eating a kill, is a privelage that many do not experience on their entire safari trip. The guides have amazing knowledge and tracking ability but the animals have large ranges and returning to where they were last seen may be disappointing. Often we have been told of a sighting and raced over a significant distance to find that we are too late. Once they disappear into bushes or lie down in long grass they can be impossible to spot again.

So it was a joy to come across two of the cheetahs from the previous evening. The morning sun cast a beautiful light and two of the cheetah were sitting on a mound surveying the plains area. They were very relaxed and not showing any sign of wanting to hunt. The light emphasised their rich golden coats and their face markings seem crisp somehow. When they moved off it was into an empty plain so we decided to leave them and go instead to the leopard den. The light had been low the previous evening and that combined with the long distance between us and the leopards had made photographing such tiny cubs difficult. We hoped to be there early enough to get a decent position to watch them. Early in the morning and late in the afternoon, when it was cooler, were favourite times for viewing. The cubs were likely to be more active. We were in luck and spotted the cubs in the entrance to the den.

The adult female was making her way across the huge rocky boulders towards them. She was probably returning from a night hunting. In this photo the cubs are on the top left of the photo but you need to look very carefully as they are well hidden when viewed from a distance.

She took her time, stopping often especially when there was a clatter of camera shutters. The cubs had a clear view of her coming but they stayed put until she stopped, checked and called them. Just one of the cubs moved down to where she was. Over the week we observed that one of the cubs was much more adventurous and energetic than the other. This gallery of photos (click on the first and it will open in a larger window so you can click through) shows the cub greeting its mother and then suckling briefly. I included the middle photo because it emphasises how small the cub is and also how well it’s colouring blends with the stones. 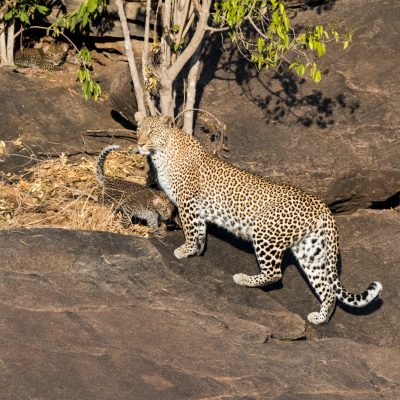 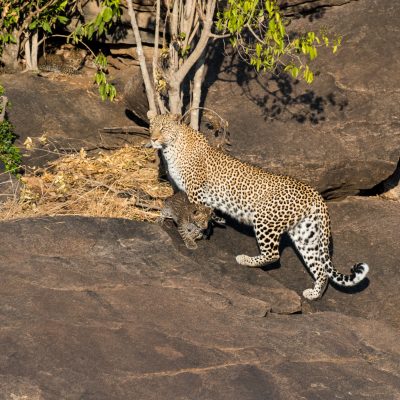 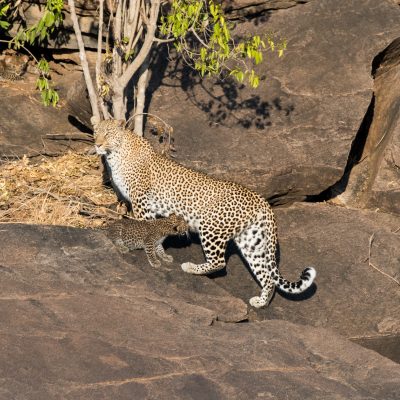 I really like the next picture. As the cub stated to progress down the slope the adult backed down so she was facing it. This picture feels as if she is restraining its enthusiasm! Notice the other cub is still at the den mouth.

As more and more vehicles arrived it got noisier and noisier. People shouted from vehicle to vehicle. I think because there was a big drop and ditch between us and the leopards people felt as if they were too far away to disturb the leopards but I do not think that was true. With such small cubs, if she felt threatened she would feel obliged to move them and this was such a good den site. There were clear views from the den, open space between the den and cover so that intruders would be exposed, spaces between the boulders that the cubs could squeeze into and a good deep rift that was the den itself. So we opted to leave them for now.

Moving on we found the cheetahs again. They came from behind a bush and were backlit by the lovely golden light. Shooting into the light is a challenge but these shots show it is worth a ‘try’.

I love how the hairs along the neck and back are picked out. This colour/tone is exactly as it was … it’s not photoshopped!

Cheetah are so light and elegant when they move. One became interested in some game in the distance and started to trot. Her feet barely touched the ground. Then she skidded to a halt. You can see how she is pulling herself to a stop.

A good morning so far and there was more to come!