Tall Day / Birds / Ostrich / Back to the ostrich chicks 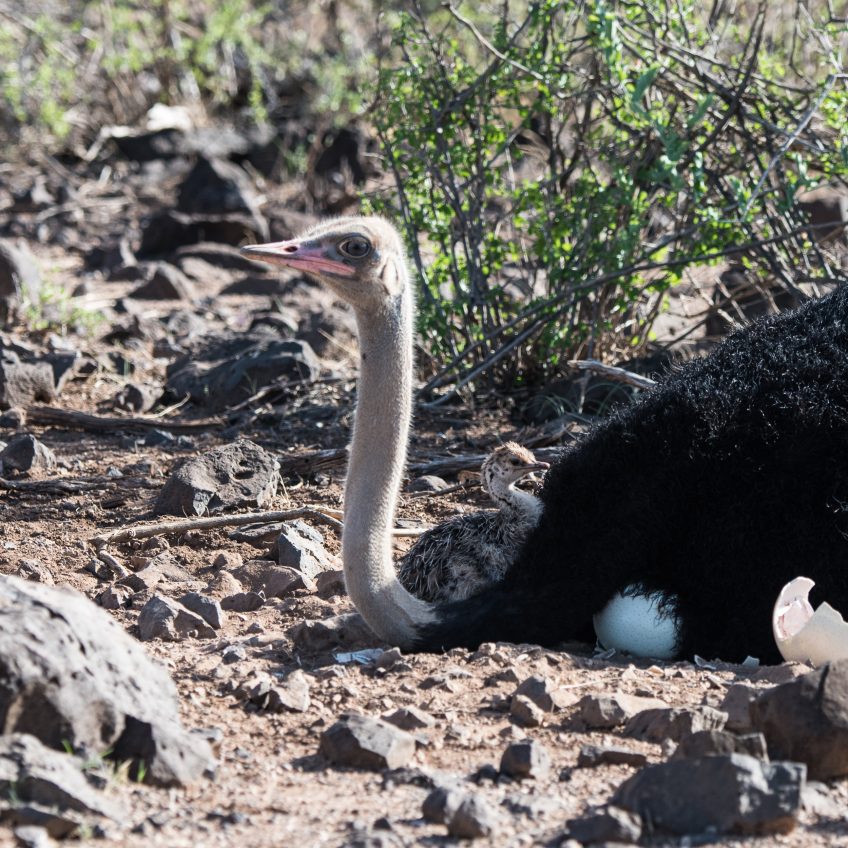 As I explained in the last post, I had thought that the ostrich we saw on the nest yesterday evening had hatched just one chick so far and I was keen to check it out and see if there were some more this morning.  So that was to be our first port of call.  I also expected that the male’s shift on the nest would be over and the female would have returned to relieve him.  I might even be lucky and see the take-over. On the way we came across a saddle-billed stork fishing in a marshy puddle.  I think the puddle may have been fed by an underground spring and, since everywhere was so dry, it was a very attractive spot. 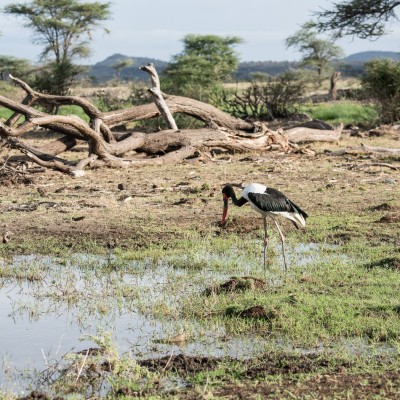 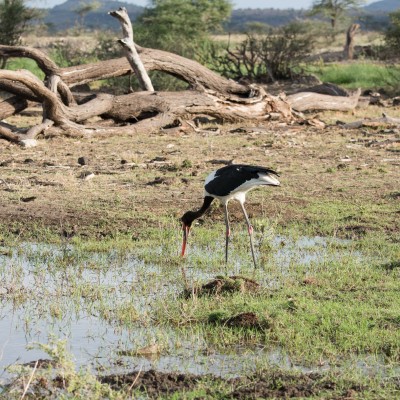 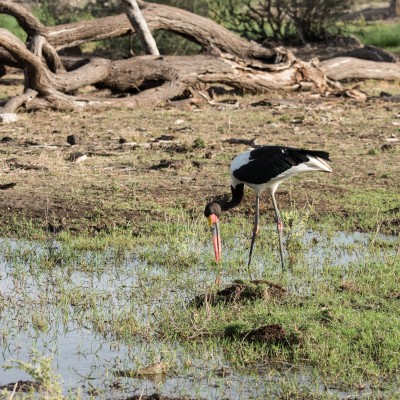 I particularly liked the dead tree in the background.  I know that sounds strange – but it forms some lovely shapes and textures.  The saddle-bill is a really imposing, large bird.  It lifts and places its feet in the water with slow precision making almost no splash (which I guess would scare the fish). Its name comes from the bright yellow patch over the top of its beak.  In the second picture you get a sight of the underside of its beak and neck.  It seems to form a V shape.  In the third picture it has tilted its head to one side and I wonder if it is listening rather than looking for something to catch. It was so quiet you could hear little plops in the water.

But the ostriches were the priority so we did not stay too long – once I felt I was not going to see it catch a fish I was happy to move on. Approaching the site of the ostrich nest there was already a vehicle there so we opted to pull over and wait for it to leave.  No sign of the female anywhere across the plain or in the line of bushes mid way to the horizon.  The male was still on the nest – in pretty much the same position as we had seen him the previous evening. I am not very good at identifying birds so periods like this where we just sit and wait are good practice. It is amazing how many bird songs you can hear if you have the engine turned off and no one is talking!  After 10 minutes or so the other vehicle pulled away and we were able to move into position.

And there it was a single chick sitting just behind the male Somali ostrich. It was beautifully framed by the curve of the neck. It did look a little tentative.  Of course, now I know there were at least 2 other chicks, it begs the question of where they were!  It may have been that they were on the other side and hidden by the back of the male bird or they may have been deep in the feathers – they certainly weren’t running around!

Then suddenly there were no chicks!  The one we had been watching completely disappeared. I didn’t see it go – I glanced away and when I looked back it was no longer visible.  This nest site is right next to the road so, as I wanted to stay and watch for a while, we repositioned a little further away, turned the engine off and settled to wait.  There was still no sign of the female even though it had been daylight for quite a long time.  I guess the description I had of the female sitting on the nest in the day because she was a buff colour and better camouflaged in daylight than the male was too simplistic.

Patience paid off.  The chick’s curiosity got the better of it and it reappeared peering over the back of its dad. What struck me when I looked at this photo back at home was that the chick’s head was at the same angle as the adults.  Both are watching us without moving.

This was the first trip where I had used the Nikon D810 with the 80-400 lens.  You don’t really know until you get the pictures up on a big screen just how much detail you have got.  In my case that is when I get home!  Because I need to keep the weight of my luggage down I only carry an iPad mini with me.  This allows me to back up copies of the raw files for safety and to look at the pictures on a bigger screen than the camera screen.  Even so the real result is only seen when I download onto my computer at home.  This doubles the enjoyment.  In the field I am watching movement and behaviour, trying to frame pictures, seeking to catch a particular moment – you miss so much of the detail.  This lens, camera combo caught some fine detail that I had been unaware of at the time.  The textures of the neck skin and the fine hairs on it, the fact the ostrich has blue-grey eyes (do they all?), and the large ears.  I had never thought about the ears on an ostrich – and never really noticed them. You can also see how shallow the nest is – no more than a hollowed out or even pressed down patch of earth surrounded by hard, sharp stones. 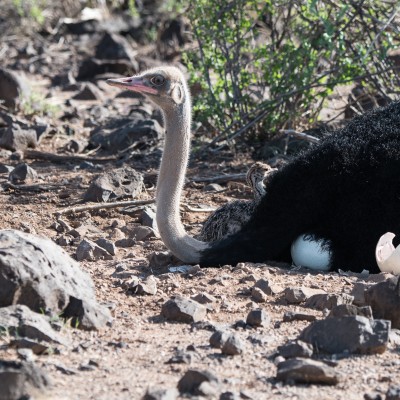 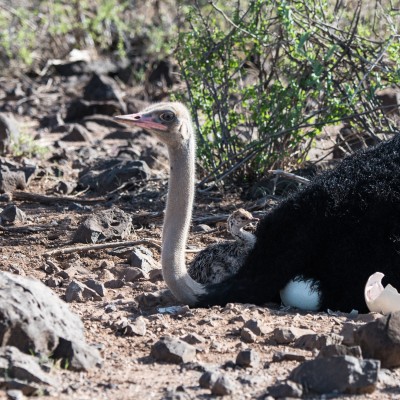 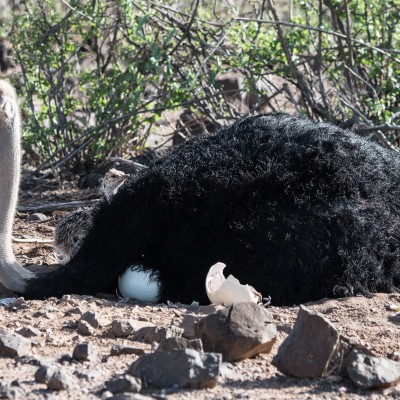 The female was still no where to be seen but we had been there long enough so it was time to move on.  I was becoming concerned that there was still only one chick but the male seemed to still be incubating so all was probably well.

I am including photographs that I think are close enough and clear enough to view on the website but it would be misleading to suggest that these are easily available when you are on safari.  Often you are seeing animals through a screen of bushes or trees and these are never going to make classic photos!! True sometimes some judicious or even ruthless cropping can turn them into something but sometimes I feel like that is missing the point.  For me the photos need to be secondary to the experience. The experience of watching that animal going about its natural business in its natural habitat.

The next encounter on this morning safari is a case in point.  I have not often seen cheetah in Samburu and in part that is because of the thick scrub which limits your view. We had caught a glimpse of one the previous afternoon so we were on the look-out but it is not a zoo so there was no way of knowing where it would be today.  I think in Samburu the cats are less habituated because there are fewer visitors and vehicles so they stay still and well hidden and the landscape facilitates this. Driving along happily and enjoying the other animals like the zebra and impala we came to a sudden halt. There ahead of us in the limited shade cast by a bush was a cheetah.

We stayed back and made the most of the sighting but it soon got up and moved away from us around a clump of bushes.

I clambered into the back of the landrover to snatch a picture from the other side of the tree – for me these ‘narrative’ photos help me recall the experience. 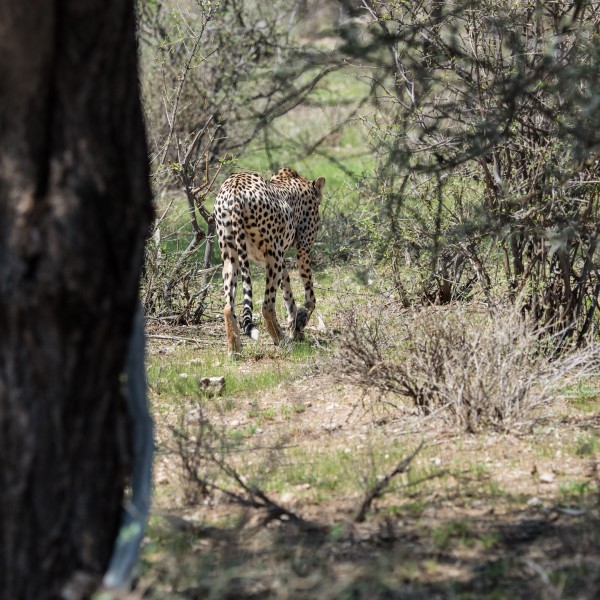 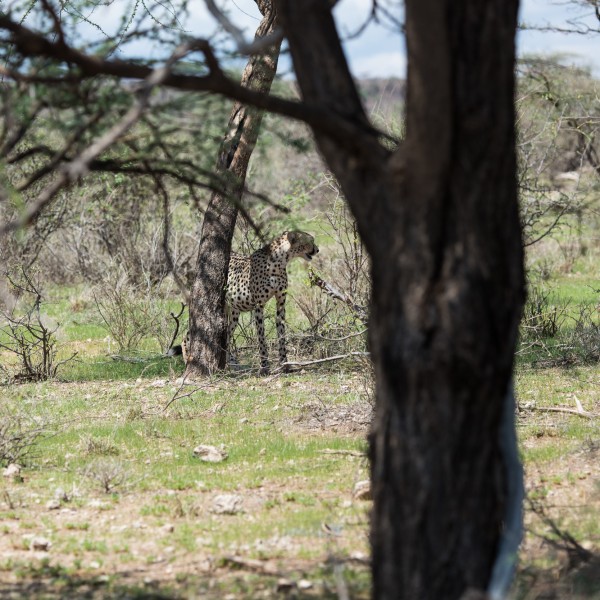 Then we moved position a little bit so as to watch her journey.  The lens came up trumps again! I was able to capture her checking out a a tree for smells before she disappeared. 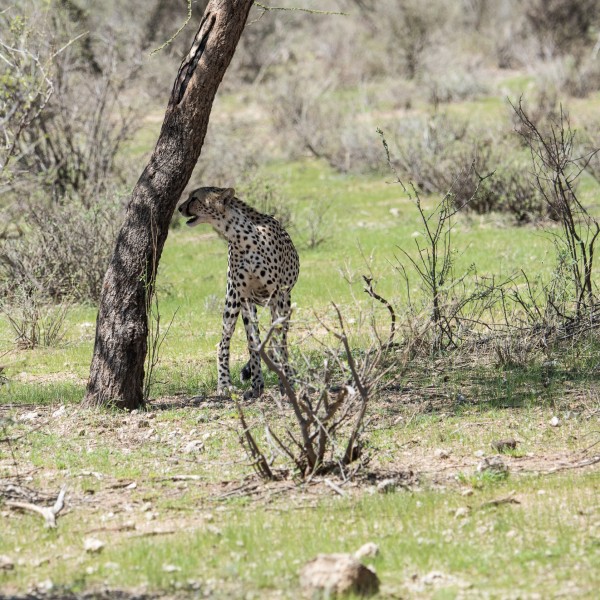 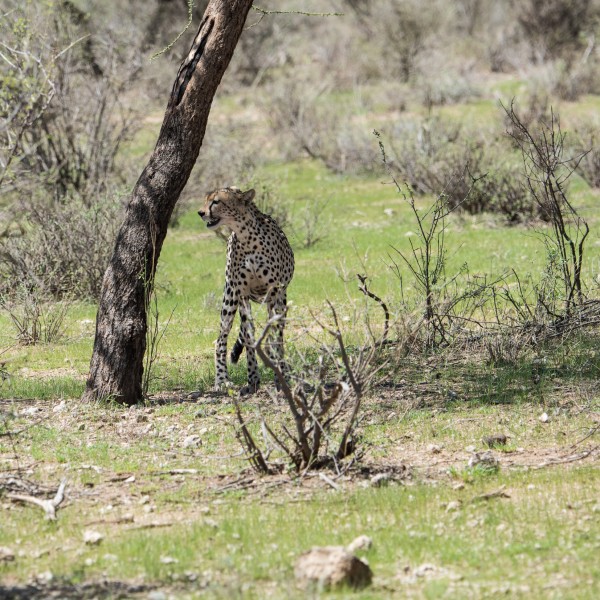 As the day heats up – and it gets very hot in Samburu – most animals make for what shade there is.  You start looking under trees and bushes rather than for movement.  Elephants make the most of the shade offered by Acacia trees.  The shade cast is not very big so the family groups stand very close together with their ears flapping to cool them down. 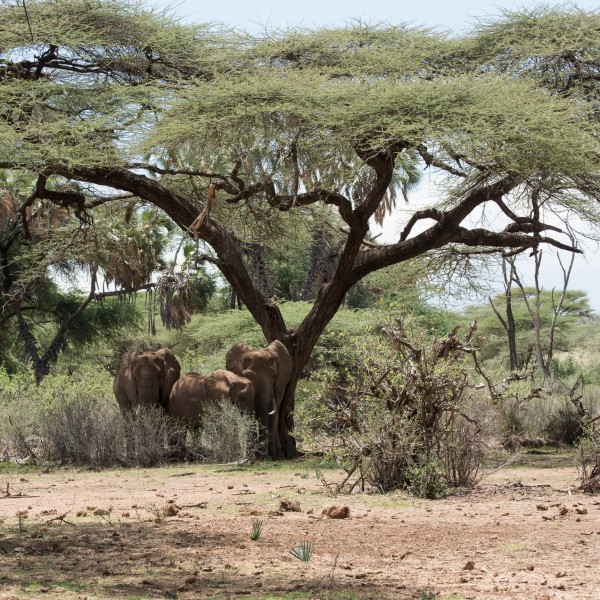 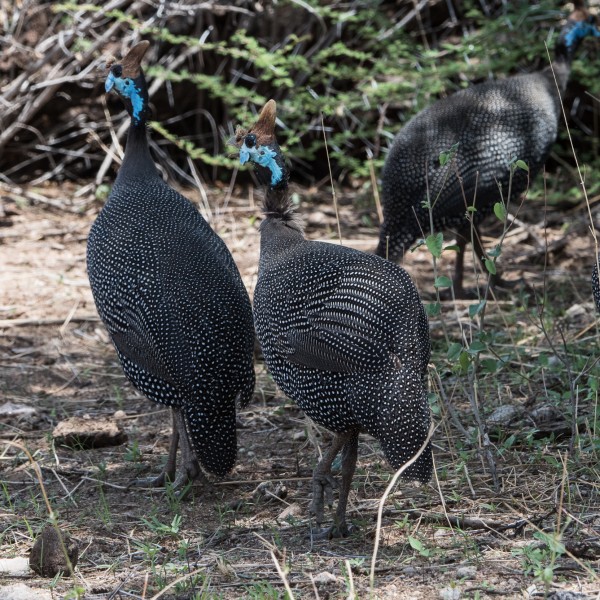 Even the guineafowl are in the shade as they scratch around in the dirt. These helmeted guineafowl are noticeably different from the bare headed vulturine  guineafowl taken on the first afternoon.  Their brown ‘helmets’ sticking up from the top of their heads and iridescent blue cheeks are striking.  The birds are always varied.  On this safari we had a brown snake-eagle perched high above us on an acacia tree that looked as if it was sizing us up for lunch, a beautiful namaqua dove with its extraordinary long tail, and a spur-winged lapwing standing right next to a small crocodile! 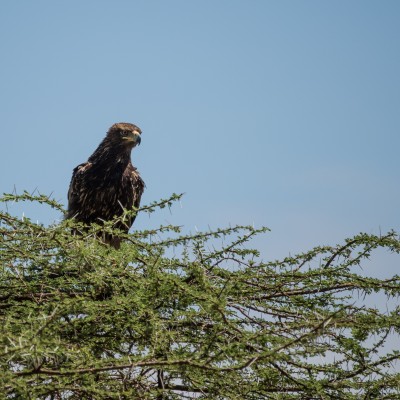 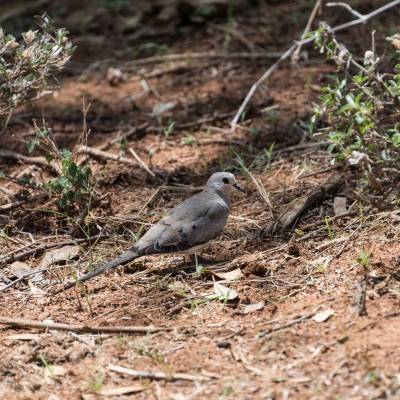 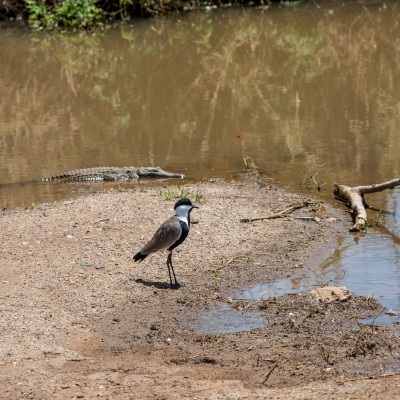 The lapwing of course was perfectly positioned to make a quick get away if the crocodile made a move.  The crocodile, although it watched the bird, just lazed in the water.  The increasing heat was the signal to head back to camp.  A good drink of water and we were on our way.  No safari is over until you actually get back to camp! The Ashnil camp is on the river so the last bit of the safari often provides some game. Today as we drove along the bank high above the dry river we startled a common waterbuck.  It stayed long enough to allow me to get a close-up shot before drinking from the trickle of water in the river bed. 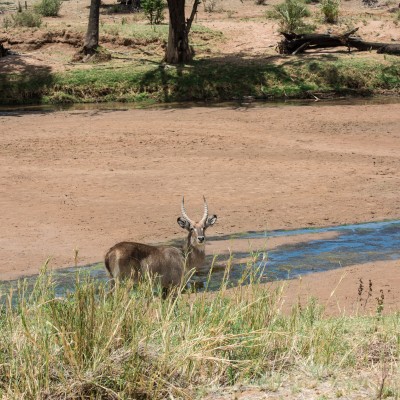 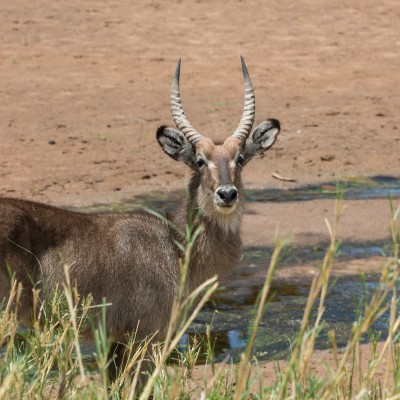 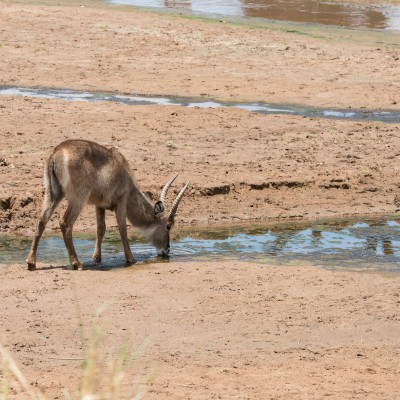 You seem to get a wide variety of colour with waterbuck.  This one had a lovely burnished coat.  Its circle on the rump is just visible.  It has such a beautifully balanced face with its white stripes defining its nose and the large ears balancing the beautiful twisted horns. A great morning but time for a siesta!