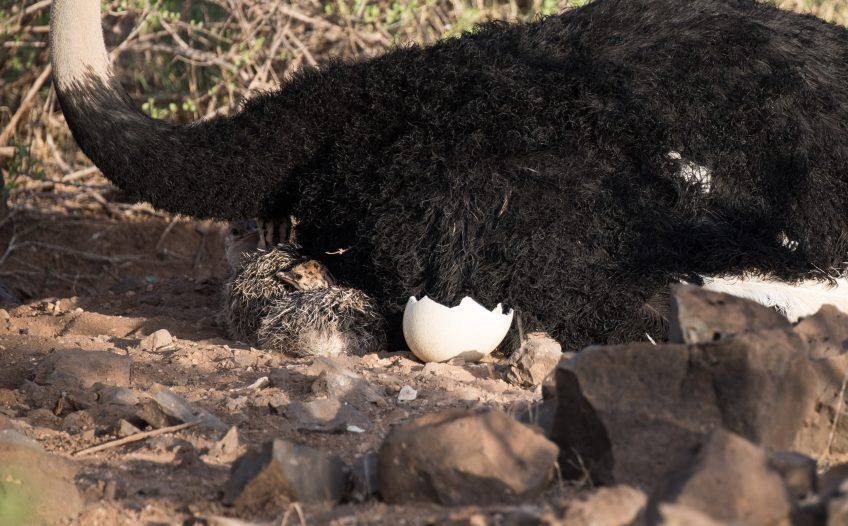 When we set off the sun was out but the sky was a dark, stormy, grey-blue. Probably my favourite combination! After about an hour, a movement to our right caught our attention.  It was a cheetah. You don’t see cats in Samburu as often as you do in the Mara so this was special. It was quite a distance from us and moving away so we were seeing it from behind.  It was skinny and much paler than the Mara cheetahs but it is always really special to watch the long elegant strides and the way it disappears into the landscape.

The birds were very active. There are so many types of weaver and the white-headed buffalo weaver is very common. I like this weaver picture because of the way it seems to be peeping over the branch of the Acacia tree at us.  Its bright orange rump is visible.

A little later we came across what I think is a Goshawk.  Perched on a dead tree it had fluffed up its feathers and was preening but when it finished it adopted a more familiar pose.  In the photo on the left you can clearly see the shape of its beak.  I think the markings on these birds are really beautiful. The beak is such a bright yellow and the stripes on the underside are precise and delicate – you may need to zoom in on the picture to see them. I have a better photograph than this from a previous trip (I must look it out) but this was still a good moment on this afternoon safari.

The Goshawk is quite a contrast to the Vulture perched high up on an Acacia tree!! Its typical hunched stance is so suggestive of power and menace but there is something disquieting about the bald head. It is as if it has had a mishap and lost the feathers – but of course it is just how a Lappet-faced vulture is meant to be. It is quite a dramatic picture … lit by the sun against against the stormy sky.

We had a nice sighting of a Leopard Tortoise but moving away from us across stony ground so not an especially good photo and then around another bend in the road we were able to watch gerenuk feeding. The tree they are feeding on is full of weaver nests.  Old ones I think.

While we were watching them there was message over the radio to let us know that there were some very young ostrich chicks.  There was time to go there before returning to camp.  I was expecting to see the chicks scurrying along between the parents but they were even younger than that! As we approached the open ground where the nest was we could see the female going off across the plain to feed.  The male ostrich ‘baby sits’ over night and this male was shuffling into position.  The nest was right next to the road and was just a patch of bare earth in amongst the boulders.  There was a little thin scrub behind the nest but not really cover.  This nest was much more exposed than other nests I have seen. We kept our distance and the ostrich did not seem concerned.  The huge egg shell that the chick had hatched from was nicely exposed and you could see how thick it was.  There was a bigger surprise for me though! I thought that there was just one chick that had hatched (so much so that I was keen to go back the next day and see if the rest had emerged!) but when I got back to England and put the photos on the bigger computer screen it was clear that there were three chicks there.  One was the larger active one that looked at us, moved around, and peeped out from under the wing feathers of the adult bird, and then there were two more crouched down next to the neck of the adult ostrich.  They are so like the boulders and stones, and I was so fixated on the one that was moving around, that I just didn’t see them with the naked eye!  As the ostrich moved and resettled there were clearly other eggs there. 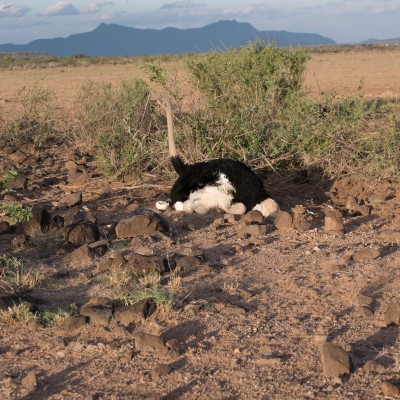 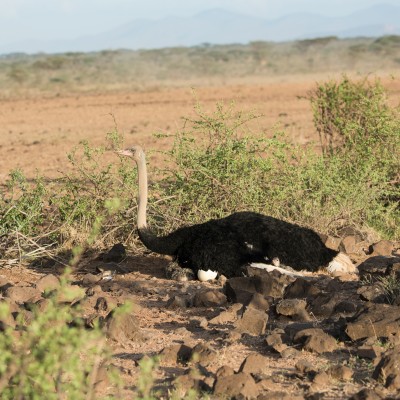 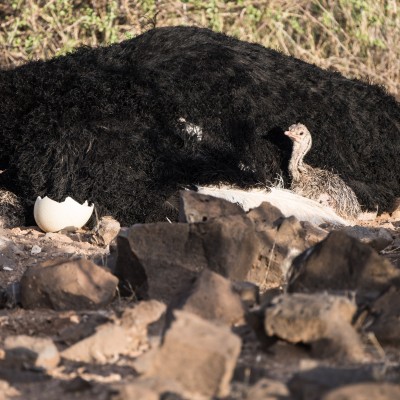 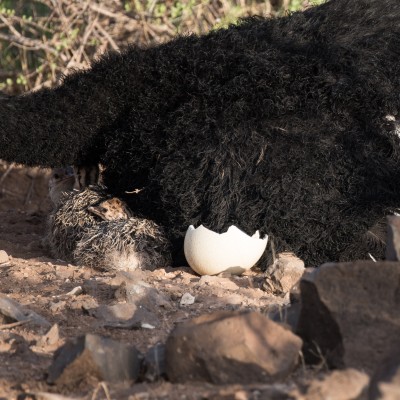 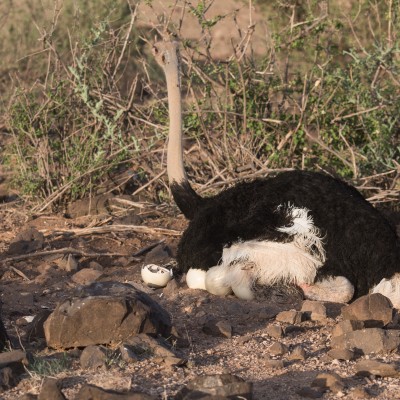 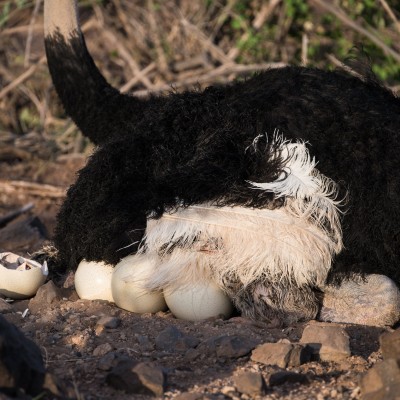 I also managed to catch the ostrich blinking!  This took a few goes but it was worth the wait! The eye-lid slides across the eye rather than our up and down movement.  When it is completely across it looks rather strange.  These close-up photos also show the texture of the neck skin – compete with insects!  Again I only saw those when I got the photographs on the computer.  The ostrich certainly wasn’t concerned by them. 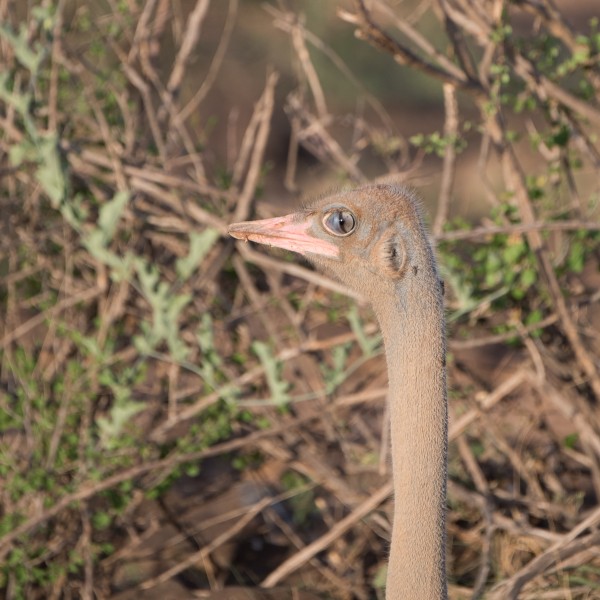 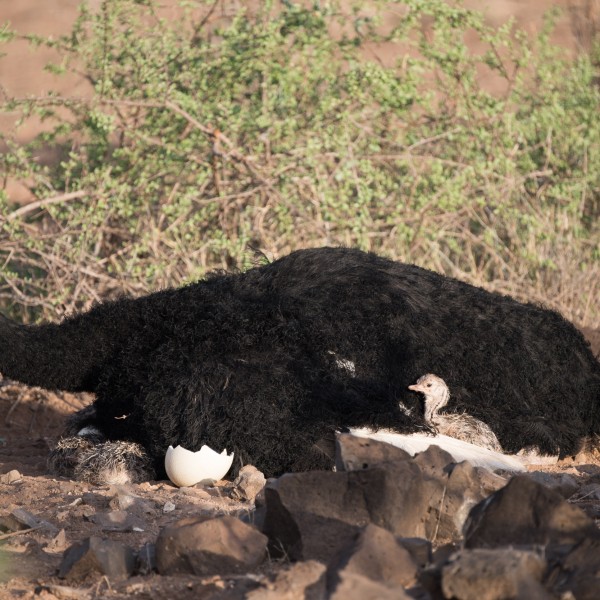 We didn’t stay too long because we didn’t want to disturb them.  Then, to top off a great drive, we saw this beautiful jackal on its way out to hunt.  It positively posed for me! The ears are large and very hairy – I hadn’t noticed that before.